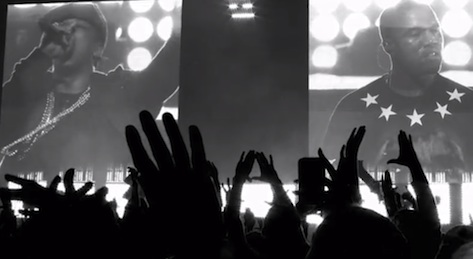 Second only to Sade, my favorite concert experience last year was attending Jay-Z and Kanye West's Watch the Throne Tour last year in Baltimore. It was my first time seeing Jay and Ye live, and I swear that I didn't sit down once that night. The show was just that crunk, and I was so caught up in the rapture that I might have even been caught throwing up the Roc a few times. The show culminated in a rousing performance of "Ni--as n Paris," the standout party starter from Watch the Throne, with The Throne rewinding and taking the song from the top and the audience getting more and more hyped with each repeat. So upon hearing that the song's video was filmed at the Staples Center when WTT stopped in Los Angeles, I just knew that it was going to be an over-the-top, ball-so-hard extravaganza. In reality? Not so much.

Here are three ways Jay-Z and Kanye West's "Ni--as In Paris" didn't get in the zone:

1. So we're still using mirror images and kaleidoscope effects in videos, are we?

The mirror image camera effect was cutting edge and cool when Prince used it in the music video for "When Doves Cry." In 1984. It's hardly what's hot in the streets in 2012. These special effects just aren't very special anymore. The video could have just been a straight ahead concert film type situation, and it would have been just fine. That never gets old whether you attended the concert and want to relive the memories or didn't attend and want to see what you missed.

For a song named "Ni--as In Paris," call me crazy, but wouldn't it have made sense for there to have been something Parisian in the video? Where's the Eiffel Tower? The Champs-Élysées? Hell, a croissant? With all the "special" effects that they used, they could have thrown in some shots of The City of Light in lieu of filming the video there, which would have made the most sense of all.

"Ni--as In Paris" was already the jam before the WTT Tour. Repeat performances to end the show each night worked all of those in attendance into a frenzy. I saw with my own two eyes grown ass men lose their shit like tweens at a Mindless Behavior concert whenever Jay hollered "AGAIN!" The video had the potential to capture that, but it didn't despite flashes of model chicks waving their hands in the air like they just didn't care. Oddly enough, that's how I feel after watching this a couple times -- I just don't care to see it again. I'd rather hold tight to my memories of seeing this performed live, which are much, much better.

What can I say, I had such high expectations for these visuals after my WTT experience. If a video is going to cause epileptic seizures, at least make it a good one.