Does D’Banj’s ‘Oliver Twist’ Video Live Up To The Hype? 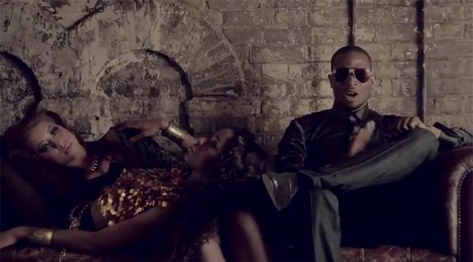 Full disclosure: unlike 95% of people who've set foot on African soil in the last decade, I've never been much of a D'Banj fan. So when I visited Lagos, Nigeria last November, he was the last artist I expected to have on repeat as I navigated JFK International a month later. But there's something to be said for the power of repetition. At first mocked for its grade-school songwriting, the song in question, "Oliver Twist," was on blast everywhere I went that November. The song had only just begun to decline in popularity when I returned to Lagos in January, and then it took hold everywhere else, with everyone from Estelle to Kardinal Offishal to, most YouTubably, Ryan Parrott, offering their takes on the insanely infectious afro-dance cut, and giving it new legs in the process.

And so we are, a whopping six months after the single's initial release, gathered here today to discuss the much-hyped video by promising Nigerian director Sesan. With all its celebrity cameos and the rumored behind-the-scenes friction, anticipation ran insanely high. In fact, I expectantly began this review two months ago with the opening line: "this is what it looks like when doves climax."

Sadly, it looks like that's a phenomenon I'll have to wait even longer to know firsthand. The video is appealing enough -- adequate in its execution of desaturated, meticulously-messy chic -- but as it employs every device from ornamental corpse-chicks (who don't, in this case, have the decency to stop blinking), to shock-bait religious imagery (completely superfluous to the rest of the video), to the old chestnut of the white guy bustin' a black move (I guess we should be glad the Rappin' Granny was unavailable, though said white guy does bust a mean Ghanaian Azonto), this really was a video in search of a reason to exist.

So, in come the cameos to save the day. With everyone from U.S. acts Pusha-T, Big Sean, and Mannie Fresh, to Brits Sneakbo and Keisha Buchanan of Sugababes fame popping up for their blink-and-you-missed-me moments of screen time, it's interesting that the most notable guest list-related moment comes at the end of the video, when D'Banj joins a hooded man in an elevator. The big revelation is not that his cohort is Kanye West (who recently signed D'Banj to the G.O.O.D. family), but that it isn't Don Jazzy, the song's prolific producer often credited with the former's stratospheric successes in Africa and Europe. Jazzy, also signed to a production deal with G.O.O.D. and featured on last year's Watch The Throne album, recently released a statement confirming rumors of his split from his flagship artist, with many wondering if D'Banj's impressive run of hits is about to hit the skids.

But our main concern for now has to be with the undeniable piece of earcrack that is "Oliver Twist." As this kitten takes the first, labored steps of its fourth life, one can't help but shudder at the five sickly, painful incarnations ahead and wonder if Buffy also performs euthanasia.