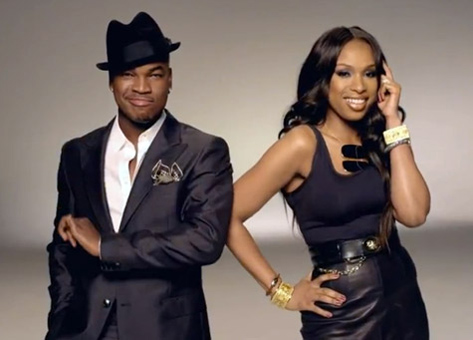 As Jennifer Hudson continued putting out Weight Watchers videos with the prolific gusto of a pre-BHO bin Laden, the visual-obsessed peanut gallery (read: folks like me) wondered when she'd finally use this new frame of hers in the service of an uptempo music video.
Well, the wait is over, fellow shallow-end swimmers. The Hudson, fresh off her hard-fought campaign for the official title of She Most Affected by Whitney's Passing, is officially allowed to smile again, hamming it up (in a non-gastronomical sense, of course) for Chris Robinson's cameras in the video for her collaboration with Ne-Yo and Rick Ross, "Think Like A Man."


The video, leading off the Steve Harvey-spawned flick's
soundtrack, sees Hudson looking radiant as ever as she acts opposite Kevin Hart (whom everyone tells me
is supposed to be funny), and vamps with a bevy of secretary-styled dancers. From lighting
to styling to set design, almost everyone brings their B+ game to this affair (which
is about as much as can be expected for a label budget in 2012 for artists not
named Gaga).


The only area found wanting -- even by generic, contemporary
music video standards -- is the dancing. At first, I went with the clichéd assumption
that ,
not yet secure in her new, industry-mandated onscreen sexuality, wasn't able to
commit fully to poppin' that thang for the cameras. But when I saw the backup
dancers were even messier, I realized the true failure here came from
choreographer Fatima Robinson. And it is a major fail, considering this video is bound
to face comparisons to that other
office-themed R&B-Pop clip -- a battle it already stood no chance of
winning. Still, this drubbing was just unnecessarily brutal, and I blame The
Duo Robinson equally for its failings in both dance and overall style points.

Ross, for his part, has never looked better. Props go to the
cinematographer for truly creative lighting that made his head -- crown to beard
-- reflect a near-uniform (yet highly textured) shade of jasper, like a living,
larger-than-life bust on exhibit in the Museum of Hip-Hop. Robinson-The-Male definitely deserves some credit for finally turning Ross' most egregious lie
into something remotely resembling fact.
In fact, the only one fully committed to Sparkle Motion in
this clip was Ne-Yo. From his popping movements to his perfectly timed
head-tics, he gave us the full, unabashed Beyoncé treatment. Actually, some of Hudson's most engaging
scenes came when she was playing off his energy, making this a fitting successor to that
other milestone in gender-role reversal, Usher and Alicia Keys' "My Boo."

And for that, Mr. Smith, we salute you.