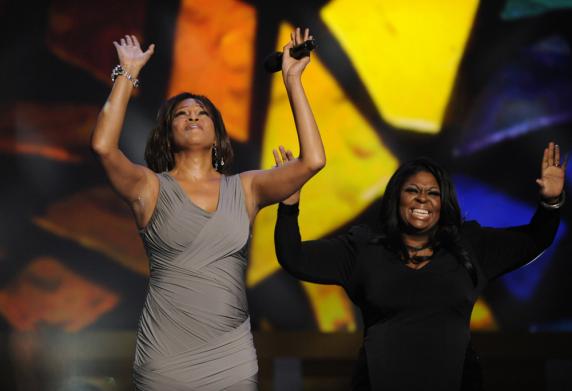 The head of Kim Burrell's management team, Krishnar Lewis, has announced that the singer and dear friend to Whitney Houston will be working with Grammy Award winning producer Mano Hanes to record a commemorative project honoring the life of the legend. Over the past few years, we have seen Kim Burrell's public displays of love and honor for Whitney
(see BET Honors 2010 and BET Celebration of Gospel 2011), prior to her untimely passing.  Even during the media whirlwind that ensued after that unfortunate night at the Beverly Hilton, when we watched many artists run to outlets to share their last moments with the fallen singer, Kim managed to captivate our hearts with consistently sincere, genuine, and respectful interviews. I'm certain that much of the music industry has begun planning similar projects to pay homage to the legacy of music that Houston leaves behind, but with Kim Burrell's incredible vocal ability and genuine connection, I believe that this recording, if no other, will truly honor the singer, actress, and friend. Kim Burrell will record The Whitney Houston Commemorative Project at EastWest Studios in Los Angeles, California on March 27th.


TAGS:  Kim Burrell, Krishnar Lewis, Mano Hanes, whitney houston
Previous: You’ll Want To ‘Run’ To Sleepy Brown Next: We Got A Jones In Our ‘Bones’ For Melanie Fiona