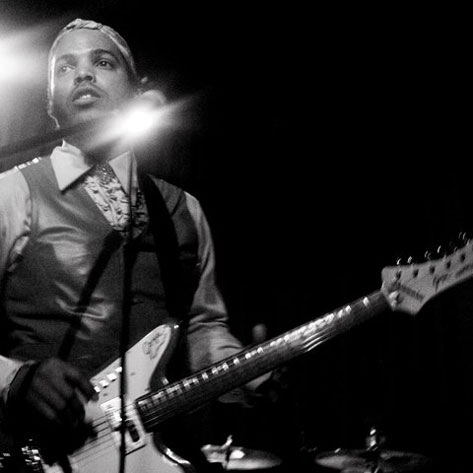 Although I haven't seen him in concert in a few years, one of my favorite live performers is Van Hunt. The man throws down on stage with his cool yet hot combination of rock, soul, funk, and blues. Van regularly proves that he's no studio creation (how many artists can say that these days?) with his sounds-better-than-the-record singing and playing. If you've never had the opportunity to see him live, then do yourself the favor and catch him on tour this month and next. But if you're unable to make that happen, then the very next best thing would be to pick up his new album, Live at the Troubadour 2011, when it's released on Tuesday, March 13th. Right now he's offering up two free downloads to whet appetites for the album's release. The first is of the What Were You Hoping For? single "Eyes Like Pearls," which you can check out below and download from SoundCloud. Should you dig what you hear, then pre-order Live at the Troubadour 2011 directly from Van Hunt's website in order to get your hands on the freebie-with-purchase of his live rendition of the scorcher "Seconds of Pleasure" from his self-titled debut. Sold yet? You should be. Check out Live at the Troubadour 2011's tracklist after the bounce to see if Van included your favorites on this record.

The Lowest 1 Of My Desires
Outro
Down Here In Hell
Dust
A Time Machine Is My New Girlfriend
Her December
Eyes Like Pearls
Prelude, Reprise, Highlights
Character
North Hollywood
What Can I Say
What Were You Hoping For?
Watching You Go Crazy Is Driving Me Insane
Man Of The Year
Seconds Of Pleasure
SNM
Intro
The Dimples on UR Bottom
Hello, Goodbye