What The Game’s Been Missing: Lady Lyricists

It's no secret that rap is notoriously male-dominated (and misogynist). And while the machismo your favorite gangster rapper sweats through his du-rag gives the music that "authentic" sound, you can't help but wonder where all the lady lyricists are. It's odd when you think about it. Many young people, especially women, came of age in the hip-hop era, but later generations don't get the benefit of having a Monie Love or an MC Lyte to speak to their realities. Shoot, even Mia X, Amil, Charli Baltimore , Lil' Kim, and Missy made things interesting in the '90's rap scene. Instead millenials are stuck with something called a Kreayshawn and are robbed of lyrical content, talent, and diversity.
Center

The game has a seriously been missing lady rappers, or femcees, if you will, that appeal to the wide cross section of hip-hop listeners. Someone who's unafraid of her womanhood, but doesn't have to act like a complete bust-it-baby to get her point across.

Sure there are plenty of chanteuses who represent a wide array of musical styles -- there's Jill Scott, Ledisi, Sy Smith, Elle Varner, Rihanna, Esperanza Spalding, et al. They all have something to offer a flavor for every palette, but they aren't rappers. We need lady lyricists who can go stiletto-to-toe in a Friday Freestyle. That's not to say that there aren't femcees holding their own in this cold rap game -- Jean Grae (she's been around for a while), Rapsody, and Invincible immediately come mind. That's what, three people? Oh, and Nicki Minaj.

Patron saint of candy paint lacefronts from Weave Express and fartfaces, Onika Maraj is frustrating precisely because she is a seriously talented rapper. But her scary Barbie situation distracts from the fact that she can actually rhyme, and she is the only woman that has captured national attention and deference as a rapper. Watching this video reminded me that she could have been the next Lauryn Hill, sonning anyone else who would dare jump on a rhyme with her. Remember, Lauryn's rapping put Pras to shame waaaaay before she was crooning Instead chose a different, albeit profitable path.

I miss Queen Latifah and her royal kufi, forcefully challenging the sexist term bitch and urging us to consider unity. Where is the 2012 Salt-n-Pepa, who can talk about safe sex without minimizing their female sexuality? Don't get me wrong, I love my Big K.R.I.T and Common as much as the next girl, but is it too much to ask for a femcee who can keep it real and still destroy on the track? Where are my ladies at? 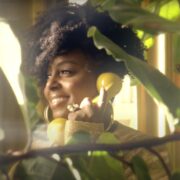