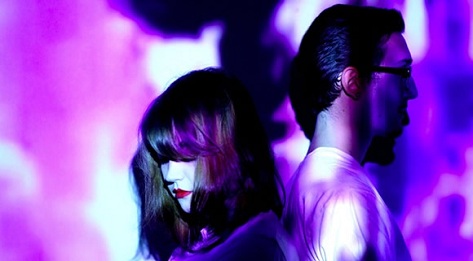 When I was a kid, one of my favorite books was Maurice Sendak's Where the Wild Things Are. The tripped-out 2009 film adaptation not withstanding, it's a story that will always have a place in my heart. Of course, my absolute favorite part of the book was the Wild Rumpus (apparently, it's President Obama's favorite part as well). One thing I've always wondered is what the wild rumpus would actually sound like. Thanks to Plug Research representers and SoulBounce faves Sonnymoon, I no longer have to wonder. Their song "Wild Rumpus," the second single from their upcoming self-titled debut, is a deliciously off-kilter outing which finds Dane and Anna creating the soundtrack for the book's joyous occasion. While their original take indeed lives up to its title, the remixes they've included along with the single add even more. The Blum Remix sets a nice, dreamy quality to the song, but it's the Time Wharp remix that truly ramps up the wildness, with tribal-inspired drums, hand claps and found sounds from the original and other places knocking about like crazy. Think of it as the wild rumpus meets Baltimore club. You can check out all versions of "Wild Rumpus" below and then head over to iTunes to add the single to your digital collection.