What The Game’s Been Missing: Musicals 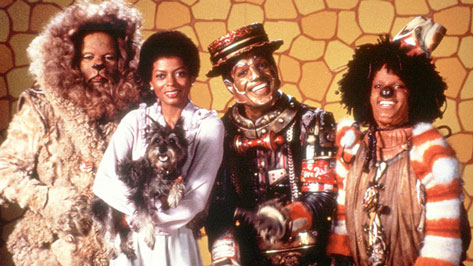 Flowers are blooming, filling the air with their pollen and destroying the allergies of everyone from
Florida to New York. Birds are chirping in excitement about the fact that the long winter is over, and
creeps across the country are preparing to savor the rear view of every pretty round brown in a sundress. It's
official. Spring has sprung, y'all.
Center


What would spring be without the beautiful harmonies of music, filling the air, coaxing us out of our
hibernation and into the beauty of the full sunlight? And nothing says "printemps" to me like a good
old fashioned musical. Not just movies that are music-themed, such as The Five Heartbeats, Sister Act, Cadillac
Records
, and soon the Sparkle remake. This may sound cheesy, but musicals, in all their glory, are soooo much fun. True, they may
require a large suspension of belief to buy people bursting into song and dancing in the street at random, but the campiness is
downright delightful. Why can't there be more that black folks would actually dig?

Of course, The Sound of Music is a standard musical beloved across the racial divide. So many bangers
are on that album, from "The Sound of Music" to "Sixteen Going on Seventeen" to "Maria." This musical explored the themes of family and growth over the backdrop of a pretty heavy
issue (World War II). Julie Andrews was fun, warm, and lovely. The children were singing and dancing
bundles of cute. Their father was dashing. It was just dreamy. There's just not that level of storytelling
with a musical twist in it anymore.

But before The Sound of Music, there was the chocolate remix of George Bizet's Carmen, featuring
Dorothy Dandridge's timeless banging-ness and Harry Belafonte's sexy island charm in full effect. The
fact that Dottie lip-synched for her life made no difference -- she smoldered alongside her co-stars, and
that temptation scene in the mess hall was totally believable. Come on black people, we have done this
well before; we could definitely make lightning strike twice. Even in the not-too-distant past, musicals
like Moulin Rouge and Hairspray have stoked our nostalgia for all storylines sung
lustily by our main characters. Let's get back to that, because even the most serious issues (war, sex,
crime, and race) can be broached with a strong vibrato and a shoulder shimmy.

Why should Bollywood have all the fun? Imagine a world where
The Wiz is remade for modern times with SoulBounce faves starring in the lead roles. A fresh-faced Melanie Fiona would warble about the longing for
home. A cuddly Phonte Coleman could pussyfoot about as the Cowardly Lion. Andre 3000 would be squeaky clean as the Tin Man. Austin Brown could pop lock in the footsteps of his uncle Michael Jackson as the Scarecrow.
That sounds like a certified party and something that Hollyhood needs to produce ASAPtually. Some of us desire to ease on down the road with our stories instead
of just having them made plain.