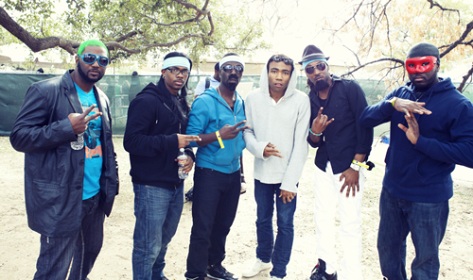 Could Turquoise Jeep be going legit? Yes, their previous joints have been strictly for S's and G's, but "F--k Your Blog," their recent collabo with Childish Gambino (aka Donald Glover), finds Jeep members Flynt Flossy and Yung Humma going hard with a banging beat and refined flows that suggest that there is more to the crew than just jokes. Not to be outdone, though, Gambino rounds out the track with an Internet-focused rhyme that references .gifs, the "S--t [Insert Group Here] Say" meme, and the attention-craving need for some people to be the first to comment on a post. Honestly, it's probably one of Gambino's finest moments, with the rapper/comedian going in like we've never heard him before. While this is probably a one-off moment for both camps, we wouldn't be mad at further collaborative efforts between Turquoise Jeep and Gambino if it all bangs like this.
Center