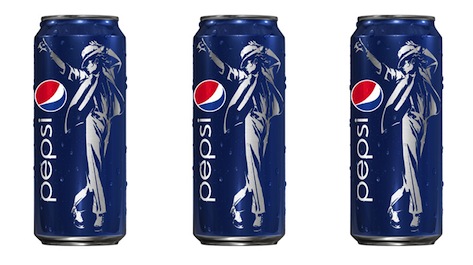 Using the passing of a deceased legend and making a quick buck seems to be a running trend as of late. By now you've most likely heard the news that Pepsi would be featuring Michael Jackson's image on its cans as a part of its "Live for Now" campaign. It would be wrong to compare this to all the hologram talk that we've been hearing as of late considering the fact that a performance bearing the icons likeness is beneficial for their fans (In theory at least anyway right?). The King of Pop on a can of pop serves no purpose other than generating profits for the cola company. It's not even like these cans can be collected by Jackson enthusiasts. Trust me, my buddy tried saving those Star Wars cans that Pepsi released about a decade ago only to have them randomly spray Mountain Dew all over his room after a few months. Real sticky situation. You'd think that estate would go with the competition of the company that set Jackson's Jheri curl on fire simply out of principle, but I guess number one Coca-Cola doesn't need the boost in revenue as badly. Cans are set to be released in China this weekend, and will hit the U.S. by the end of the month. It will be interesting to see the public's response to this move by Pepsi. I, for one, will be drinking crystal clear water.
Center