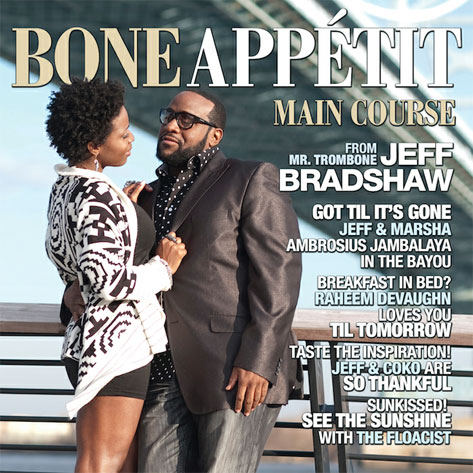 Jeff Bradshaw is a true artist. Born and raised in the City of Brotherly Love, he's most well known for his skills on the trombone, even though he also sings, writes, produces and arranges. Given all of that talent, he could've gone it alone on his sophomore effort, Bone Appétit, but instead he enlisted the ample talents of Raheem DeVaughn, Kindred the Family Soul and Coko of SWV to assist on several tracks. He even got the artists formerly known as Floetry to appear on the same album, albeit on separate songs. Bradshaw had so much to offer this go-round that he released Bone Appétit in two parts: Vol. 1 (Main Course) and Vol. 2: (Deuxieme Course).
Center

On Vol. 1 (Main Course) the "R&B hippie neo-soul rock star" kicks off the set's first collaboration in the sexy, uptempo "Til Tomorrow." Rapper Ms. Jade also lends a verse to the steamy track. Aside from a laughable line ("you're like Chinese food, I just don't get full"), husband and wife duo Kindred the Family Soul delivers on the equally sexy, but more sensual "All Day Lovin'." "Got Til It's Gone" featuring Marsha Ambrosius and Christian rapper TWyse represents a change of pace to pay homage to the spirit of New Orleans and to those who suffered devastation resulting from 2005's Hurricane Katrina. The song, of course, is a redux of the first single from Janet Jackson's 1997 Velvet Rope album, which in turn sampled Joni Mitchell's "Big Yellow Taxi" from her 1970 album, Ladies of the Canyon.

With a mellowed version of "Lay Your Head on My Pillow," Mr. Trombone gets back to the loving. Although there's no cameo crooner on the track, you'll find yourself singing along with this brassy version of Raphael Saadiq. Through his trombone, he follows the same vocal cues as the Tony! Toni! Tone! original. He gets them down all the way to the "Huh!" heard in the "cuties pies they all know" breakdown.

We've already established that Cheryl "Coko" Clemons has still got it after all these years. She brings a bit of spiritual flavor to "So Thankful" as she and Jeff express their gratitude for having a partner who is there through all of the ups and downs. "I See the Sunshine" featuring Natalie Stewart is chill and has an interesting rhythmic pattern that accents the performance style that garnered her the "Floacist" moniker. To round out the features on the album, Fatin of Kindred the Family Soul makes a welcome return on the buoyant, horn-heavy reprise of Mos Def's one and only "Umi Says" from his 2000 debut album, Black On Both Sides.

With Bone Appétit, Vol. 1 (Main Course), Bradshaw and his trombone successfully navigate that widening gray space between jazz and R&B. It isn't strictly a jazz album, and it cannot just be written off as R&B. It's a casserole of sorts, rich in flavor and filling to the core making it a worthy addition to your collection. However, if you want more, you'd be well advised to treat yourself to Vol. 2 (Deuxieme Course), which contains collaborations with PJ Morton, Maysa Leak and Brass Heaven.