Jermaine Paul Comes Out Victorious On ‘The Voice’ 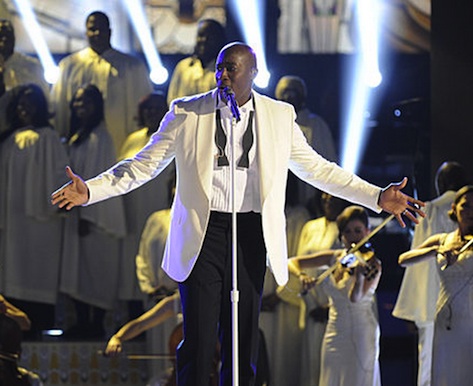 In a stunning conclusion to the second season of The Voice, singer Jermaine Paul was crowned the winner on last night's finale. Although he had his ups and downs throughout the season, he peaked at just the right time and brought his A game to the final performance round. With his striking stage presence, likable personality and soulful voice, Paul has the potential to really be a breakout R&B star with the range to do everything from pop to country (which I'm sure Blake Shelton will see to). Here's to hoping that he gets paired up with the right songwriters, producers and material for his post-Voice album and that he doesn't fall off like last year's winner Javier Colon seems to have. Time will surely tell, but I'm excited to hear what his future sounds like. Because if it sounds anything like his previous work with Alicia Keys or his leading man showing in last night's group performance of the Jackson 5's "I Want You Back" with fellow contestants James Massone, Pip and Jamar Rogers, then we're in for some serious audio treats.