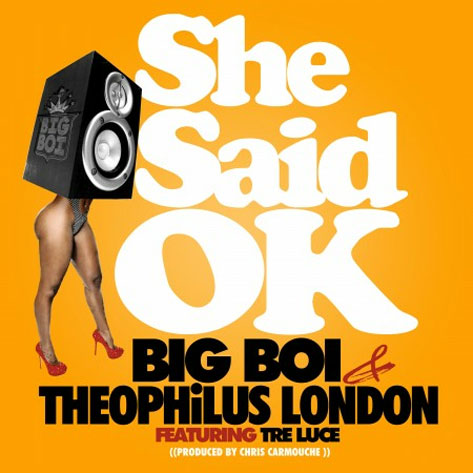 Big Boi has remained relatively quiet since dropping his 2010 LP Sir Lucious Left Foot: The Son of Chico Dusty. And during his hiatus, an ultra cool emcee by the name of Theophilus London was making his mark with a series of mixtapes and the well-received solo album, Timez Are Weird These
Dayz
. Well now the two ladykillers have joined forces on the new stripper anthem "She Said OK." One thing that cannot be argued against is consistency as the track stays NSFW from the accompanying artwork all the way down to the clever wordplay. The hook, sung by newcomer Tre Luce, is so ridiculous that you can't help but chuckle when we learn what exactly the topic of song agreed to is. Hearing Big Boi alongside another eclectic spitter will most likely conjure up mixed feelings for any Outkast fan. I won't ask you to do what these three gentlemen are requesting, but I will ask you to give the track a few spins. If the filthy punchlines don't move you, then the funky bassline should do the trick. Make sure to look out for Big Boi's upcoming album, Vicious Lies and Dangerous Rumours, and pick up Mr. London's remix album, Timez Are Weird These Nights, in stores now.
Center