‘Something’s’ Not Quite Right With Leela James’ Etta James Cover 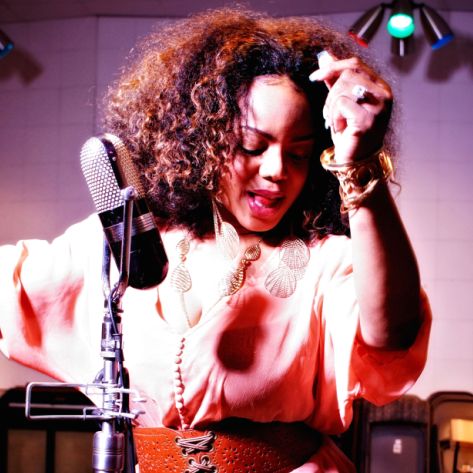 When Leela James burst onto the scene back in 2005 she was hailed as a renaissance woman, bringing back the grit and soul that had been mostly missing from female soul music since the likes of Betty Wright and Etta James were at their peak. The fact that she managed to assemble an all-star line-up of producers and collaborators for her debut only seemed to reinforce the feeling that Leela James could be "the one" to take up where those two left off. Unfortunately, after a stunning debut her follow up efforts, 2009's lackluster collection of covers, Let's Do It All Again, and 2010's disappointing My Soul, failed to capture the magic found on A Change Is Gonna Come. Following the passing of Etta James last year, Leela decided to pay tribute to her idol by recording an album of covers, to be released at the end of July. The first single from In the Spirit of Etta James is the classic "Something's Got a Hold On Me." The song has been given a contemporary makeover that, sadly, lacks the punch or the passion of the original and comes off as, dare I say it, a little half-hearted. In Leela's defense it's by no means a bad version of the song, but it's almost impossible to take on such an iconic song, by such an iconic singer and for it not to compare unfavorably, and so it's with some trepidation that I await to hear her takes on the likes of "At Last" and "I'd Rather Go Blind," arguably Etta's signature songs. Hats off to Leela, and her label Shanachie, for paying tribute to Etta and her legacy, however I feel that one of the original, "inspired by..." tracks or one of the lesser-known covers would have got this album off to a better start.
Center