What The Game’s Been Missing: Bands 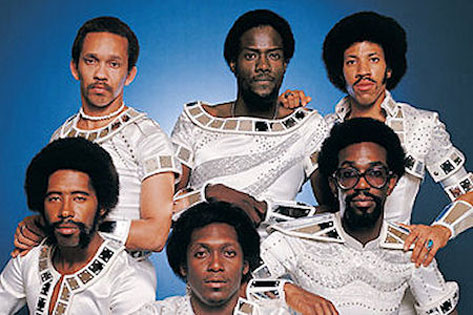 It's almost summer, y'all. Besides getting summertime fine, people are out in the streets trying to find some new way to cool down in the scorching summer sun. Soon everyone will be going to open air markets, bazaars and festivals to peruse essential oils and potentially find someone to put ice cubes on their sweltering body. And as the outdoor music festival season begins, people will be eagerly awaiting a live performance by their favorite solo artist. And they will be sorely disappointed.
Center

Because the game has been missing bands. Bands of all types: lap-bands, rubberbands, American Bandstand -- we need all of the bands. There's going to be a drought this summer if some courageous souls don't stand up and get down collectively on their instruments.

The lack of groups that play actual instruments -- together -- is low-key baffling to me. It's not like there isn't a tradition of bands in Black music. The collaborative spirit of the band is actually the bedrock of our musical tradition, in my opinion. It spans jazz (Duke Ellington's orchestra), rhythm and blues (Isley Brothers, Jackson 5), disco (Kool & the Gang, The Commodores), funk (Parliament Funkadelic, Prince & the Revolution), New Jack Swing (Tony! Toni! Tone!, Mint Condition), acid jazz (Incognito, Brand New Heavies) and even hip hop (The Roots). But besides Mint and the Legendary Roots Crew, the only other group of musicians playing together and getting widespread burn these days is the Robert Glasper Experiment.

I long for a time when I can go to an outdoor concert, and hear a song that sounds better live than it does on an album. I want to shake my sundress-clad booty to people who can sing and rap and strum and drum AT THE SAME DAMN TIME! Now that, my friends, is called talent. Bands give you a feeling of connectedness that is very different than what you get from soloists just backed by a random group of musicians who get together a few days (or hours) before a show to practice may bring to the table. Bands are filled with a close-knit family of musicians who come together to shape the music they play live or on record, giving it a unique vibe. It also means they are intimately aware of how their work will sound both on stage and in the studio. Lightweight vocalists that can't play well with others end up having to pat their privates and dance off the shame.

The fact that so many artists today want to get it popping on a solo tip just speaks to the isolation we live in nowadays. It's foolish to think you can go it alone, especially as an artist and especially as a musician. Music, like love, food, knowledge and art, is supposed to be shared. And I can't think of a better way to do than with a band of like-minded and like-talented individuals who are a part of the whole.