What The Game’s Been Missing: Real Live Performers 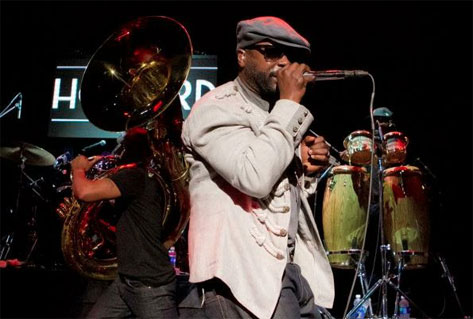 As summer quickly approaches and faster than you can say "sundress," music events will be popping up left and right. The combination of hot weather, hot artists and hot bodies means that the lowly summer jam-block party-fest will be a veritable cornucopia of aural (and other) delights. And while I can't help but wait (no Trey Songz), the reality is that when a lot of our favorite radio-ready singers come up to the mic, it will be more of a curse than a blessing. I've grown to tolerate the mechanized debauchery
that radio music spits out, mainly because I love the beat ("Birthday Cake," anyone?), but I cannot, no, WILL not support an artist who can't perform well live. Why would I pay my hard-earned money to see someone fail to even attempt to lip synch believably? That's what the game's been missing -- real live performers.
Center

What's important to understand is that things happen during live shows. There is something magical about creating something in a specific time and space with a specific group of people that can't be matched. Erykah Badu's infamous "Tyrone" performance single handedly turned a generic Catholic name into the battle cry of fed up girlfriends everywhere. Eric Roberson and Common both are masters of freestyle and can sing or spit verses off the top in way that would leave even the most hardened 2 Chainz devotee in awe.

I think part of my irritation with bad live singers and rappers is that I was raised on musicians who sounded better in person than on CD. What adds fuel to the fire is that a lot of incredible vocalists from the 1990s and early 2000s are having a stellar second wind in 2012. The throwing of e-panties have been at an all-time high this week after the release of the powerful GQ D'Angelo interview after his return to the stage earlier this year. Maxwell is still sopping the ladies and their money up like a biscuit with tickets for his upcoming throwback tour selling like new Jordans. Jill Scott slayed during her one-woman show/poetry slam/singing extravaganza on VH1 Storytellers on Monday night. Sade shut it down with her world tour last year and now we have the Bring Me Home 2011 DVD -- her third concert film. Lalah Hathaway is over 20 years deep in the biz and sounding better than ever nowadays.

And let's not forget artists who put the "entertain" in the word "entertainer" with their exciting live shows like The Roots, The Foreign Exchange, Ledisi and PJ Morton. It's no surprise then that I want a real live performance. Not the artist singing over a pre-recorded track. Not lackluster vocals that bore me to tears. I want real, live, human music from people who know how to command a stage. I am not opposed to pop-rap and pop-soul, but I'll be damned if I have to listen to Auto-Tune in person or witness an entire show lip-synced. When you've spent more than half your life listening to people who give you the musical equivalent of filet mignon, it's hard to be satisfied with Rihanna's SteakUmms.