Will You ‘Stay Awhile’ For Quincy’s Debut? 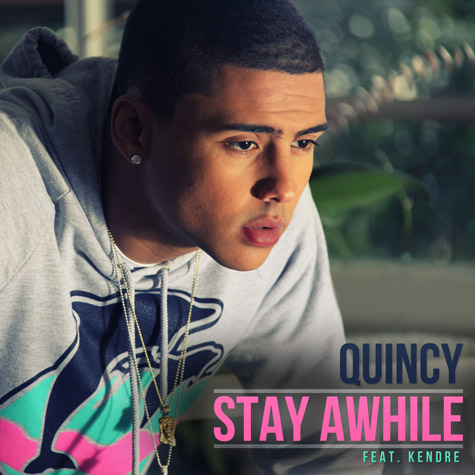 Anybody that knew me during the late '80s knew that though I loved all types of music, there was one special singer that hailed from Money Earnin' Mt. Vernon that had my heart -- Mr. Albert Brown aka Al B. Sure!. I made it a point to memorize any and every song he recorded, even going so far as to harass my mother into buying anything even remotely associated with him (The Gyrlz anyone?). The one time I managed to get up close and personal to him left me a blubbering puddle of tears. Yup, I had it that bad. Never mind the fact that he couldn't even really sing and refused to do away with his unibrow, I was hooked. So when I learned that his son, Quincy, was trying his hand at music, I was more than a little curious. I mean, in addition to being Al B.'s mini-me, he was named after the one and only Quincy Jones and grew up with Sean "Diddy" Combs as a father figure. It seemed a no-brainer that he would eventually find his way into a recording studio. Though just because he comes from such strong musical ties didn't necessarily mean he'd knock it out of the park. "Stay Awhile" featuring Kendre, serves as his official foray into music. While I was admittedly pleasantly surprised, there's little about the song to make it stand out from all the other stuff that's out these days. Sounding more like Chris Brown than this dad, I can easily see this song being a hit with the 106 & Park crowd. Though he's about 20 years too late for me, it's only a matter of time before the young man with Al B. Sure!'s heartthrob good looks and Diddy's swag will have teen girls losing their voices and dissolving into teary-eyed messes. [H/T: RU]


TAGS:  al b sure!, audio, chris brown, diddy, Kendre, Quincy, sean combs", the gyrlz
Previous: Are You ‘Ready’ For Brian McKnight’s ‘How’-To Video? Next: Get ‘Lost’ With Kanye West