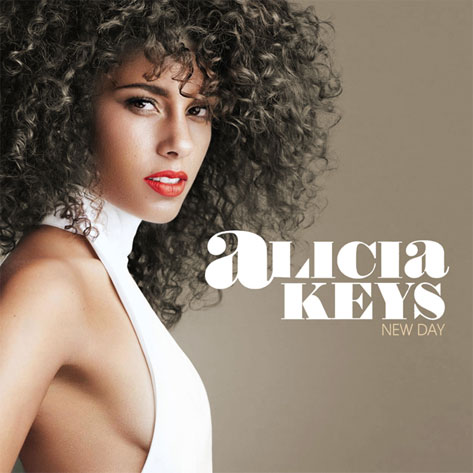 Despite popular opinion, Beyoncé isn't the only one bearing children and getting back to business. Egypt's mommy, Alicia Keys (who is looking quite hawt by the way), has released a shiny new track called "New Day" for you to add to your summer playlists. While Alicia doesn't completely toss her piano to the side on this new joint, it's apparent Swizz Beatz had his hands all up on, around and through the controls with drums, loops and horns all on deck. Suffice it to say that the Keys-Beatz sound fusion is in full effect. The song itself is an upbeat reminder from your new life coach that you've got one life to live, so live every day to the fullest. Mrs. Beatz sounds energized and happy with her own position in life. Although I honestly like it overall, the forced "ay-ays" on one too many words during the second verse grated on about two or three nerves, and I'm a little nervous about how this will sound when she performs it live. (I'm still raw from her performance of "Send Me An Angel" during Whitney Houston's understandably emotional homegoing service earlier this year.) "New Day" is our first taste of Keys' new sound. It's not clear just how much her upcoming album will differ from 2009's The Element of Freedom, but I am looking forward to hearing whether her excitement about this new music lives up to the hype. Listen to Alicia's newness after the bounce.