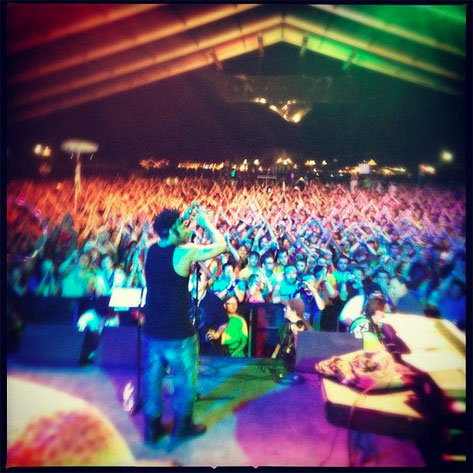 Sorry to break it to everyone going to the Essence Music Festival who thought they'd be the first to see D'Angelo's history-making return to the US stage after his European tour that topped off the year, but history was actually made this past weekend at the Bonnaroo Music & Arts Festival. That crafty little drummer with the big afro, Questlove, had a few tricks up his sleeve during his Superjam performance late Saturday night, which included "very special guests." One of those guests was none other than the heart attack-inducing appearance of D'Angelo amongst a stage full of all-stars including Jesse Johnson on guitar, Pino Palladino on bass, saxophonist Eric Leeds, singer Kendra Foster and Quest's fellow Legendary Roots Crew bandmates James Poyser, Kirk Douglas and Frank Knuckles.
Center

This was a jam session to end all jam sessions, with this supergroup performing classics from the catalogs of Funkadelic, Ohio Players, Led Zeppelin, The Beatles and many more. If it's any consolation EMF attendees, D'Angelo did not perform any of his own songs. But he and the rest of the Superjam crew nonetheless turned Bonnaroo out. Don't just take my word for it, however, because even if you weren't in the crowd of thousands to witness this firsthand, the good folks over at Funk It have obtained a pretty pristine live audio bootleg of the show and have it posted for free download, and you can also listen to said live recording below. While we wait for more D'Angelo shows and that elusive album to surface, enjoy this rare gem and get this true fan and collector's item while you can.