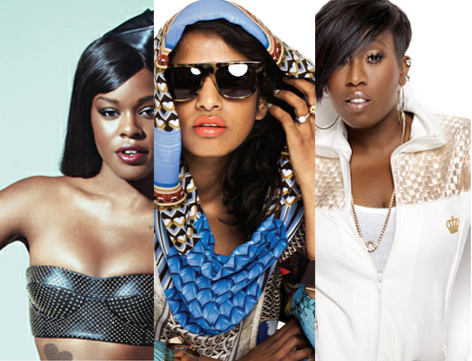 Yes, while (unlike the recently-leaked Switch remix featuring Rye Rye,) this isn't a golden-era Bad Boy-style overhaul that retains only the title of the original, it still takes me back to the '90s. Maybe it's the feeling of an Event-Record remix that actually delivers on the promise of its stars. Or maybe it's just the fact that we haven't had a worthwhile female all-star hip-hop remix since the golden era of Lil' Kim's "Not Tonight" and Total's "No One Else."

And that's probably the biggest statement this remix series makes. From its title and general conceit to its (so far) brilliant execution, the "Bad Girls" tracks both announce and celebrate the return of the female rapper. After being in cryogenic stasis from the early 2000s when an overexposed Missy seemed like the only one on the job, it's only right the subgenre is ushered back in by Elliott, who took it to greater popular highs than anyone, before herself going into a self-imposed reclusion for the latter half of the decade.

Sure, female rap still has a ways to go to regain prominence -- and I still can't tell an Iggy Azalea from an Azealia Banks. But until this remix, I really didn't care. That's got to count for something, right?