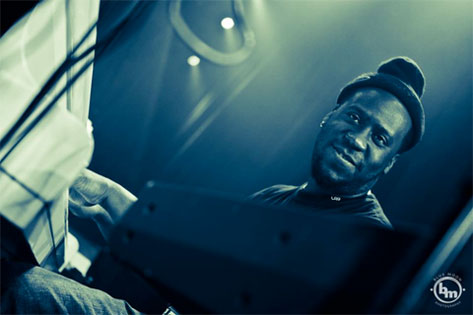 It's not often in Australia that we get quality, current and musically intelligent artists visiting our shores. If you live in Sydney, you can probably count on one hand the number of shows you've been to that were truly worthy of parting with your hard earned cash, and that made a lasting, positive impression. For some reason, promoters think we really want to see past-their-prime, has-been, one-hit wonders tour our shores with a backing track they made in 1995. So, it was refreshing this past weekend to see a show that ticked the boxes that are rarely ticked here in Australia. A show that fused New York style, attitude and musicality with artists who are at the fore front of their genres. Held at Oxford Art Factory, and aptly titled Future Now, the show featured a triple billing of beat boxer Taylor McFerrin, jazz singer Jose James and the fusion of jazz/hip-hop/soul/out-of-this-world sound that is the Robert Glasper Experiment.
Center

Having experienced the Taylor McFerrin one-man show earlier this year at Sydney Festival, I had no doubt that he would bring that same boyish, humble attitude and complex beat boxing that made him one of the stand-out acts for me back in January. Disappoint he did not, even when his laptop had a melt down mid-show. He simply took it on the chin and improvised; he played a piece on the piano and beat boxed his way through the show until his laptop decided it would co-operate and provide some extra layers to his singing, rhyming, beat boxing, piano playing, can't-take-your-eyes-off-him spectacular. Yes you read correctly, I said spectacular -- the word "show" just doesn't do him justice. Where other artists may have had a meltdown along with the laptop, he kept it going. By doing this, he gave aspects of his talent the chance to shine, that otherwise we may not have seen.

Speaking of meltdowns, next up was the jazz singer Jose James along with his band. Opening with an instrumental, this band had me at the first horn line. When Jose James took to the stage I fell even deeper. No, I'm not talking about how he looks, I'm talking about that voice, that confidence and, dare I use a completely overused word, yes I'll say it, swagger. The ability he had to fuse jazz, with a modern hip-hop feel and energy was intriguing. The fact that standing next to me was a much older gentleman who had a strong love for jazz and had come purely to see James, and was rubbing shoulders with a much younger crowd, said everything about the way James' music brings together old and new. It's music that appeals to a broad spectrum of people, so long as you love jazz and soul, he had you, regardless of age.

However, it was a few tracks in that my love affair with Jose went slightly off the rails. Where McFerrin had kept his cool in the face of things going wrong, James showed us how not to behave during a show. James decided to point out one girl in the very front who was grabbing his leg and asking him to sing a song she liked. He was quite ruthless and after mentioning sternly how rude this girl was several times, that he "would not be singing old material" and even walking off stage, it got, well, a little awkward for the audience. Was he serious? Where do we look? What happens now? I could see both sides of the coin. For James, it must have been distracting and plain annoying to have a girl grabbing your leg and yelling at you to sing the songs that have gotten you to this point in your career, but hey it comes with the territory. As for the girl, she was obviously madly in love with James, and plotting how to have his babies. Either way, after this awkward moment James returned to the stage with McFerrin, and they beat boxed and sang their way back into our good books.

James' behavior overshadowed his show, which was a shame, but we couldn't dwell on this, as up next was the Robert Glasper Experiment.

After drawn out technical difficulties delayed the start of the show, the band opened with "Cherish the Day," minus Lalah Hathaway, but still oozing the musical styling that has his latest album Black Radio on repeat on my iPod. Throughout the band's performance I felt like I was being taken on a trip. The music transported you. To where? My money was on outer space. All I knew is that we definitely were not in Sydney anymore and could possibly have left the planet. Glasper and his band -- Casey Benjamin on keytar, saxophone and vocals (thanks to the heavy use of the vocoder), Derrick Hodge on bass and Mark Colenburg on drums, showed us just how intellectually stimulating music can be. An entertaining show is one thing; this was a whole different bag of chips. Forget plain old salt & vinegar, this was some spicy, intergalactic flavor previously unheard of. But it sure was tasty.

The performance flew by in a haze of warped, textured sounds and rhythms. The crowd held on to every last note, for a clue of how these sounds were being created. The show allowed for each member of the band to showcase their outstanding talent, so although this was the "Robert Glasper" experiment, and Glasper certainly wowed us with his fancy finger work on the grand piano and keyboard, it was clear this was about the band creating an experience, not solely about one person in particular. Closing out the night with a cover of '90's grunge kings Nirvana's "Smells Like Teen Spirit," the Robert Glasper Experiment cemented the notion that they were schooling the audience on pushing musical boundaries. On a rainy and dark winter night in Sydney, the Robert Glasper Experiment, along with Taylor McFerrin and Jose James, showed us just how bright the future of music is right now.


TAGS:  jose james, lalah hathaway, Nirvana, robert glasper experiment, taylor mcferrin
Previous: Morning Soul: To Grow From Boys To Men You Must Act Like A Man Next: Prepare To Be Under Rochelle Jordan’s ‘P R E S S U R E’ This Summer