Usher’s ‘Twisted’ Is Almost What We Were ‘Looking 4’ 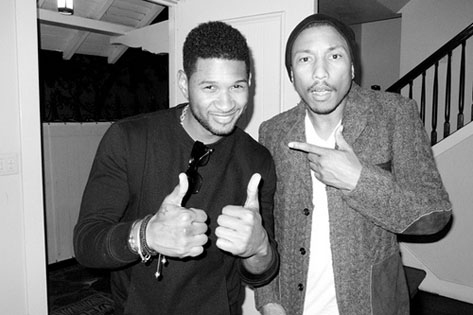 When we at SBHQ heard Usher was working on a new album entitled Looking 4 Myself, we vacillated between not giving a damn and fervently hoping he'd check the
boxes in his garage marked Confessions and 8701. Hinting at a trend toward the latter, he's reteamed with 8701 collaborator Pharrell for
the just-leaked track "Twisted." It's a blend of synths and live instrumentation -- two of The Neptunes' three areas of expertise -- yet it manages to underwhelm on both. It aims for the old-school Rock-n-Roll tradition of mushmouth vocals, shouted exhortations at a juke-joint audience, and filthy double-entendres ("So I gave her that white Chanel lipstick / She said 'How you get more out?' / Twist it."), but is too tempered to really capture the genre's raucous spirit.
Center

Lyrically, it's medoicre (as we've come to expect from Ursh 4.0), but musically, it's catchy enough. Its main flaw is that it's missing a real percussive punch even at what's meant to be its most climactic moments, making it sound more like a polished demo than an album-ready cut. Ironically, when the song finally gets the percussive boost it needs (on the "Touch It"-flavored breakdowns), every other element goes silent, making you wonder what might have been.

In the end, what you get is a decent offering that's neither as exuberant as Alicia Keys' Pharrell-remixed "How Come You Don't Call Me," nor as slickly synthy as the classic Usher/Pharrell collab "You Don't Have To Call." It's by no means a threat for party record of the summer, but we'll take this over "Scream" anytime.