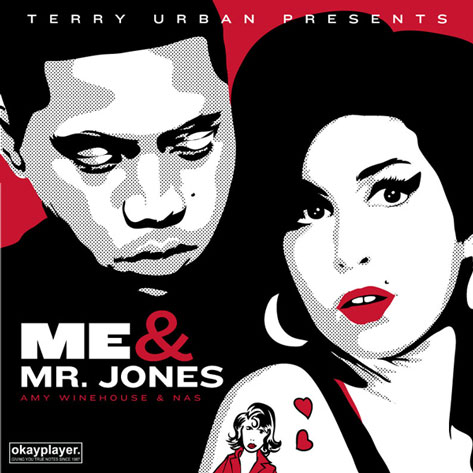 As we approach the release of Nas' highly-anticipated LP and the anniversary of Amy Winhouse's untimely death, our good friends at Okayplayer have swooped down with a masterly-crafted mix to hold over the anxious and comfort the grieving. The appropriately titled, Me & Mr. Jones, features 17 original mixes comprised of tunes from their respective catalogs. While fans of either artist will more than likely be familiar with the original work done by Nasty and Ms. Winehouse, the project manages to surprise listeners with its creative approach to the mashups. I was anticipating lazy mixes between each artists' "Halftime" or Nas spitting verses from "Made You Look" over Winehouse's "In My Bed," essentially resulting in the same song. Fortunately, neither of these tracks worked out in the way that I had expected, and I was left with a refreshing new take on these catalog favorites. Not to mention silly names like "Life's a Moody B--ch. Verses and vocals are chopped, slopped and rearranged by Terry Urban, Bladerunners and Davis E. Beats, among others, into songs all their own. There is definitely a special place in my heart for many of the originals, but I'd have to say that Judah managed to rework "Hate Me Now" into something that even a Nas stan such as myself doesn't entirely despise. Nasir's tenth studio recording, Life is Good, hits stores July 17th, and be sure to queue up your Amy faves for the anniversary of her death a few days later on July 23th. [H/T: OKP]
Center


TAGS:  amy winehouse, Bladerunners, Davis E. Beats, Judah, nas, Terry Urban
Previous: Morning Soul: ‘Bout To Call My Peeps And Take It To The Streets Next: Asheville Bouncers: Win Tickets To See Nicolay With The Hot At Nights In Concert!