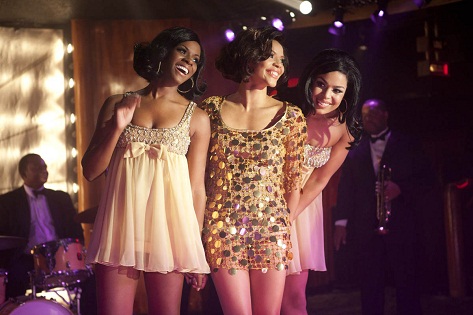 When they first announced that there would be a Sparkle remake, I was much less worried about how the film would turn out than I was about how they would tackle its most popular song, "Giving Him Something He Can Feel." Honestly, taking on the song would make most shiver in their boots. While the version featured in the 1976 original is so-so, the Curtis Mayfield-penned "Giving Something He Can Feel" got its first breath of real life from Queen of Soul Aretha Franklin on the film's accompanying soundtrack. Sixteen years later, it was given its second coming when quintessential girl group En Vogue revamped it for their sophomore set Funky Divas. Both of those versions went straight to the top of the R&B charts, and deservedly so. This new version, which features vocals by Jordin Sparks and Tika Sumpter with Carmen Ejogo on lead, didn't stand a chance to compete with those two versions from the start, but I at least expected a decent try.

The 2012 version is just all kinds of wrong. Carmen's thin, breathy vocal makes Lonette McKee's take sound like Mahalia Jackson in comparison. And, for a song that's supposed to be sexy and seducing, it just sounds like a group of inexperienced high school friends singing in a talent show. Couple that with an arrangement that sounds more Broadway paint-by-numbers than soulful and you have a recipe for disappointment. This solidifies that the only reason I'll be watching Sparkle when it arrives August 17th will be to see Whitney Houston one last time. You can listen to Jordin & Co.'s version of "Giving Him Something He Can Feel" here (if you really want to do that to your life) and the entire Sparkle soundtrack over at Essence. To wash the bad taste out of your mouths, I've also included En Vogue's version below. Now this is how the song should be sung.