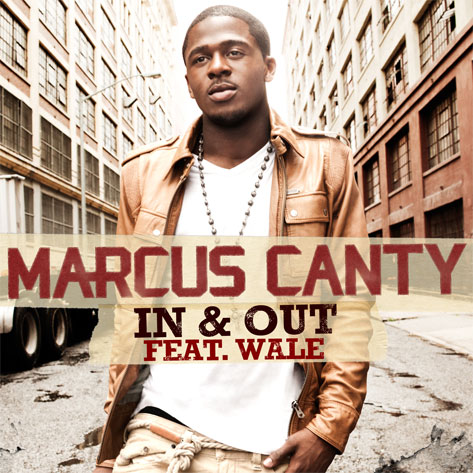 Marcus Canty and his team have their sights set on the clubs, and his new single, "In & Out," will probably get eaten up there. Ladies, if you thought you were going to pin down the newcomer, you might want to start working on plan B. On the Harmony "H-Money" Samuels-produced track featuring Wale, Canty sings, "They be trying to find a way to my heart, I be trying to find a way to leave," so be forewarned that if you fall for him you're likely to get your feelings hurt. But, I have to question whether you'll even care to know his name. Although the Shabba Ranks' "Ting-A-Ling"-sampled track will likely keep you on the dance floor, Mr. Canty isn't offering anything new. When I first heard the overconfident X Factor semifinalist's debut single, "Won't Make A Fool Out of You," I began to think he just might be able to set himself apart from the radio dominating members of the BNC (Bare Nekkid Chest) club who more often than not make better eye candy than music. If he's going to do that, he'll have to return with something more original. People aren't buying music like they used to, and mediocrity will not translate into album sales or longevity. Marcus is a natural talent and should produce a solid album with L.A. Reid at the helm of his label, Epic Records. Because I like to see talented individuals prevail, I'm hoping his album offers up more diversity so that when all is said and done people don't use the title of his new song to describe his career. Give the track a listen and let us know when it comes to Marcus Canty, are you 'In' or are you 'Out?'