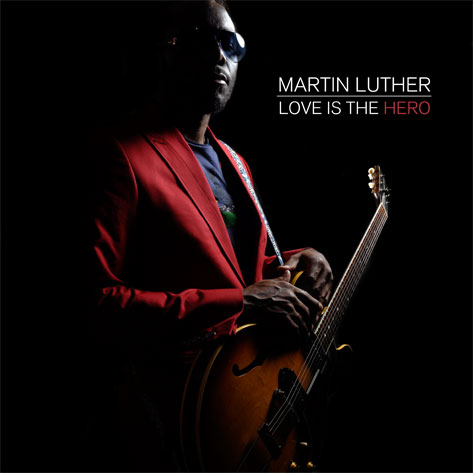 The time that stretches between new projects from Martin Luther can vary greatly. Sometimes it can be a matter of years between releases. Luckily for fans of one of the Bay Area's finest musical exports, the most recent waiting time has only spanned a matter of months. After releasing his last project, Extra Terrestial Brother, via Bandcamp last September, he blesses fans with a new album in less than a year, Love is the Hero. Released earlier this month, the album is filled with the same blend of soul and rock that has made him one of music's best kept secrets for over a decade.
Center

Led by the driving and reassuring "Waiting For You," Love is the Hero alternates between social commentary ("Kiler Machines" and "Somebody Superstar") and odes to both love lost and found ("Everything Is U" and "Precious"). It's hard to ignore the influences of earlier artists like Prince and Jimi Hendrix. He also gives a nod to classic duo Hall & Oates with his remake of "Sara Smile" that was leaked back in June.

While the album is comprised of gems unearthed in his vault, it's hard to tell because of how well the songs fit together with one another. If you're a nerd like me, then you're still old school enough to still prefer holding a physical CD in your hand and reading the liner notes. However, one of the best things about Bandcamp is being able to read the background details on each song. Martin Luther draws the curtain back on the inception and creation of every song, allowing listeners deeper into the fold. And with a deluxe edition of the album in the works, fans can rest assured that LITH will be the gift that keeps on giving.