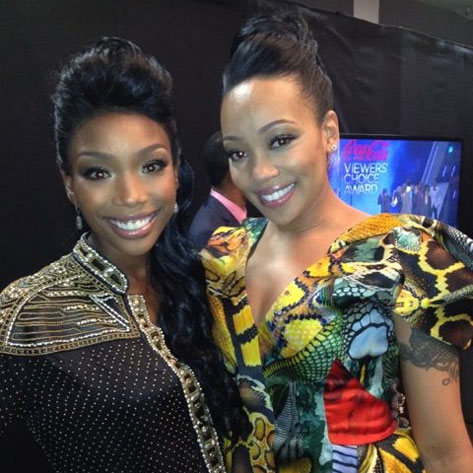 Most who have seen the BET Awards '12 are in full agreement that two of the brightest stars to shine on stage that night were Brandy and Monica. Yes, they were fully invested in the Whitney Houston tribute and it was all about her and not them, but you couldn't help but listen to each sing, watch them perform and wonder why these two aren't on Whitney's level of pop stardom when the talent is obviously still there. At one moment in time, it seemed as if both Brandy and Monica were well on their way to being the next generation of diva, but then something changed. Life kinda happened to them both, music evolved (or devolved in many cases) and the Beyoncé's and Rihanna's of the world took over. But Brandy and Monica are still here, and we don't want them to go anywhere, but we do want them to get better material worthy of their talent so that they can, in fact, stick around for many more years to come and add some new songs to their respective catalogs of hits. Which brings us to this latest SoundTable Discussion, which was actually born out of another conversation about Frank Ocean and his songwriting. But once we strayed off topic, we found that we couldn't stop talking about this one. Hit the bounce to see for yourself and join in on the discussion.
Center

Remi: With all this Frank Ocean talk, I have to say I'm salivating at the thought of his upcoming collaboration with Brandy.

SoulUK: Well let's face it, whatever he writes for Brandy can't be as bad as that sh-t she released with Monica.

I SO want Brandy to stage a HUGE comeback, but deep down I'm fully expecting to be a bit of a let down. Not bad, just not great.

Put it like this, I'm more looking forward to Ocean's album than Brandy's...words I'd never would have thought would pass my lips.

Remi: Choke on your words, SoulUK!!!

But no, even if the album isn't a commercial smash like we pray it will be, I just want a quality record. I fear in her chart-chasing, she may record more crap like the first two singles, but considering her track record, I'm cautiously optimistic.

SoulUK: Personally I don't care if it's a commercial hit (although for her sake I hope it is), I too just want a quality record.

Fingers and toes are crossed, but I'm just not building myself up for a disappointment. Hell, I'd love nothing more than for her to blow my predictions out the water and prove me completely wrong.

If BET showed us one thing (other than D'Angelo is back on track), its that Brandy still has "it" as does Monica, they just need the material to match their talent.

AudioDiva: Brandy and Monica have "it" still, but they just need some better material because I haven't really liked anything Brandy's done since Afrodisiac (sorry, didn't "get" why everybody loved Human) and Monica's Still Standing, while good in some spots, was problematic in others and New Life has already been forgotten. When they try to be with the mainstream, they end up sounding generic and dull, making it hard for me to see if they really have any talent to begin with -- which I know they do, but some of their material tells me otherwise.

And, yeah, the wool is pulled off of my eyes about that last duet they did. Talk about disappointing garbage.

Remi: I didn't like Human, actually. Loved some outtakes like "Drum Life" but not the actual album. She's gone on record saying she's going back to R&B (i.e., not the MOR mess that Human was) for Two Eleven. Again, this is why I'm excited about the record.

Butta: Besides the obvious flavor-of-the-moment chart-chasing that Brandy and Monica have been engaging in, they need to get with different songwriters and producers. These clowns who every artist runs to today for a hit have way more misses.

Remi: Yeah, and I feel like Bran's found her perfect collaborators, so I already know what my dream album would be in terms of producers:

Rodney "Darkchild" Jenkins (As long as he doesn't come with some mediocre, dated crap like "Right Here." But as I'm already on a quoting-Brandy streak, I'll add that she called him out on that tragic Family Business show for not giving her his best on Human.)

Frank Ocean (Possibly, because I feel his maudlin style and her crazy vocal arrangements could make for some serious magic.

I know. Sometimes I step back and realize how much of a stan I am. Sigh. Afrodisiac was literally my "tolerate-love" turning point.

D-Money: "These clowns who every artist runs to today for a hit have way more misses." YESSSSS!

Also, if I hear one more blatant producer shout out on an R&B song. It's so annoying. No one cares who produced it, and if you're good at what you do, everyone knows you produced it anyway.

And, yes, I know it's an old practice by now, but it's still annoying.

AudioDiva: What Butta said. Just because a producer has a good track record for two years doesn't mean they are going to work every time and for every artist, and that if they don't evolve themselves, they can't let the artists they produce for do so.

Case in point: Timbaland. He began to get horrible after Justin Timberlake's Future Sex and has remained so. So when Madonna scooped him up we got the Fuzzy Candy Found In Between Sofa Cushions and that was the nail in the coffin.

To be honest, I think Brandy should just find someone new. I'd take her working with Ocean because at least he's different. Darkchild has been spotty, but currently he's making me NOT look forward to that new Nelly Furtado album. I think the only producer to me who hasn't faltered (yet) and is still going strong from the '90s into his 2000 hey-day is Pharrell. The man has been consistent and I think Brandy should hook up with him, but that's just me. Then again, Brandy should give a new producer a chance and get him famous so we can complain about his decline five years from now. LOL

Remi: Bite your tongue, AudioDiva! While I agree about Pharrell and the Secret Zombie Chad maintaining quality over the years, I wouldn't put them alone in that box.

Jermaine Dupri is one of the single most consistently brilliant (and yet, criminally underrated) producers of our musical generation. His accomplishments in R&B songwriting are especially overlooked. Confessions was his story and his work, moreso than Usher's. I mean, he finally got his moment in the commercial sun in '05, thanks to Mariah and Bow Wow, but everyone's gone back to sleeping on him.

D-Money: I'll agree with you on that point, Remi. Jermaine's production skills do go unnoticed, but there's still no need to shout him out on record, though.

But I'll agree with AudioDiva on the hobbit comment. As I said on Instagram, dude is shorter than beard stubble.

Remi: Hahaha. I always say: "if you don't take credit for your work, someone else will."

And considering the recent trend of big-name producers aping other big-name producers to recreate an artist's last smash (Darkchild jocking Rich Harrison on "Deja Vu," The-Dream recreating "Get Me Bodied" on "Single Ladies," Stargate giving Mariah Bootleg "We Belong Together" 5.0 on "Bye Bye"), I'd say there's a need for it.

D-Money: I mean, I get that there are style-jackers out there, but you can always tell the difference between the knockoff and the original (or at least I can). There's always something not quite right.

AudioDiva: Oh, I have nothing against Jermaine Dupri as a producer. I mean, he got Mariah Carey off of life support with Emancipation as nobody but die-hard Mimi fans like me were checking for her during those dark days with Glitter and Charmbracelet, and Confessions is an R&B classic thanks to him and Jam & Lewis -- two cats who have also been consistent throughout the years as well. So I have nothin' but love for him as a producer, it's just those damn "SO SO DEF!" screamings and him looking like he needs to lead Gandalf out of the Shire, but that doesn't change my mind that the dude is mad talented and oft forgotten about. In fact, I'd readily lend an ear to a Dupri produced track right now than a Timbaland one.

Remi: Well, are we giving Rico Love originality and subtlety points for "Turn the lights on!!"?

D-Money: My God NO!!! That is the most annoying thing ever, especially in a song that's supposed to be a ballad. Turn 'em OFF!!! © Teddy P.

AudioDiva: And I agree with Remi on the point of recycling. The recycling has got to go with some of these producers and songwriters, because the music listening public isn't stupid, they know when a song sounds like another. Well, at least I do.

Remi: No, the record-buying public is a little stupid. I decided that when Mariah took "Don't Forget About Us" to number one, just months after "We Belong Together" (though they smacked her hand when she tried that trick 3 more times). And there was the aforementioned "Single Ladies."

Eminem released the same lead single off every album for almost a decade, and folks ate it up. Missy began to do the same thing, and U2 released "Elevation" like four times.

Like they say, a person may be smart, discerning and all that. But people? Nah, they're dumb as a bag of crayons.

Or rather, they're lazy and complacent. It's like: "I know I have no business supporting Abraham Lincoln: Vampire Slayer, but hey. It's new and in theaters."

AudioDiva: I think producers need to start challenging whoever they work with, like they used to do back in the olden days. Sort of like Phil Spector steering Tina Turner to singing out of her rock 'n' roll range into sweeping sounds like "River Deep Mountain High." Sure that was a means to get Tina into the white mainstream (and to me wasn't the greatest song), but her sound changed and began to vary and be more exciting. Some of these singers aren't being challenged and/or aren't challenging themselves, thus we get stilted and repeated productions. That's my problem, no stepping out of the comfort zone is taken.