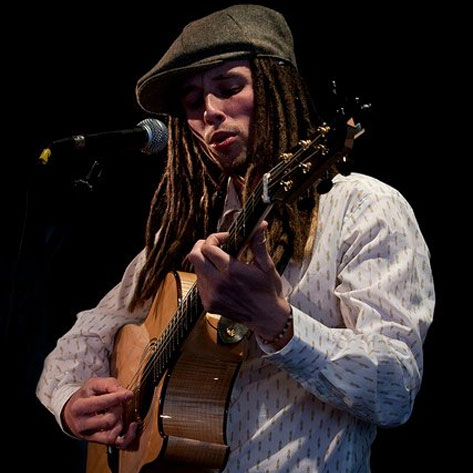 Manchester, UK raised singer/songwriter JP Cooper expressed in a recent interview with UK blog Soul Features that while he wouldn't call his music gospel, that it is heavily "influenced by gospel." Well, JP, while I, too, wouldn't call your music gospel, I certainly would say that it bares the same spirit. It is not merely music that's pleasant to the ear but something, which, much like gospel, transcends the tangible in this world and allows the listener to feel connected to something special. I realized that quickly after watching YouTube videos of this blue-eyed, dreadlocked, guitar-playing soul singer. One listen of "I've Been Watching" or "The Only Reason" and it is evident that JP Cooper's music is something that needs to be shared.
Center

Cooper's music has an acoustic soul/folk tinge that allows it to cross genres and have widespread appeal. His voice bares the marks of that love of gospel that I mentioned earlier, as well as of traditional R&B and blues. It has a depth and an effortless ability to hit runs and riffs at the right times, contrasting with the simplicity of the production and arrangement of his songs. All of this contributes to making Cooper's music all the more intriguing and highlighting that he is very much a storyteller. A listen to his two EPs, simply titled EP1 and EP2, are evidence of this, with lyrical content that discusses various relationships with honesty and humility.

JP Cooper is definitely one to watch if you prefer your soul music to be raw, stripped down and mellow. If you happen to be around the UK, then you're lucky enough to have the chance to catch him perform live, but for those of us a little farther away, have a watch of Cooper's performance of "I've Been Watching" and sample some of his stellar musical offerings below.


TAGS:  audio, JP Cooper
Previous: Funkineven & Fatima Give Us Those ’90s’ Vibes Next: Here’s One More Reason To Let Miguel ‘Adorn’ You