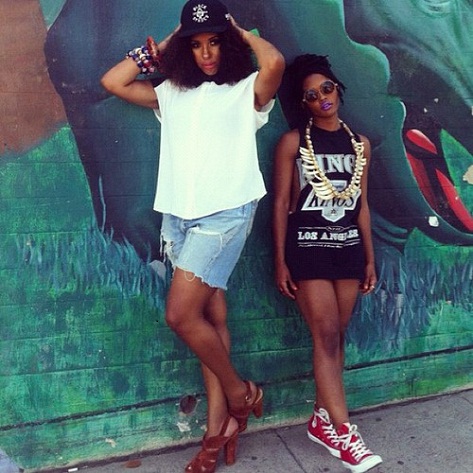 It's been a while since we saw Nola Darling kicking up dust in the desert in the video for the song "STFU (Start a Riot)." Though they might have been out of sight, they haven't been idle. They're currently a part of LA's edition of Converse's Rubber Tracks. Their contribution, "A New Way to Say I Love You," is a mid-tempo, reggae-tinged affair where the duo wax poetic about a love so good that it takes more than those three little words to do it justice. To create the track, they teamed up with the ever-talented Om'Mas Keith (of SA-RA Creative Partners fame), who laced them something nice with this one. It's a good thing, too, seeing as they're competing for votes alongside a very talented group of artists, including SB faves I, Ced, Coultrain and Def Sound. Will the ladies reign supreme? Give their track a spin below and give them your vote (or check out their competition) here. Either way, be sure to cast your votes today, as this is the last day of the contest. If you're in LA, you can also catch Nola Darling at this weekend's Converse Block Party. [H/T: 2DB]
Center