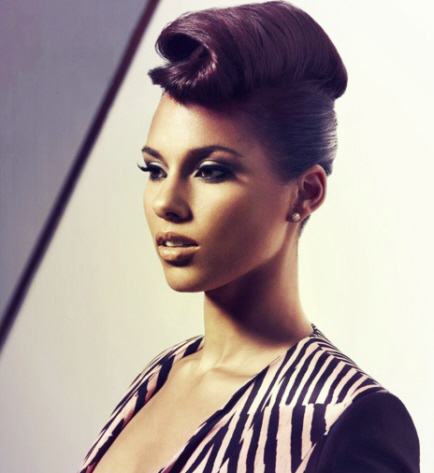 Ward off the roll of eyes, the snap of the critical whip of words, and hold the sour pickles over the fact that Alicia Keys has sunk deeper into mediocrity, because the singer has finally come correct with her brand new single from the encroaching Girl On Fire. After celebrating a "New Day" and then getting her Katniss Everdeen on (is anybody not noticing the Hunger Games references with this project?), Keys laces out the piano-led "Not Even The King" and expels some intimate honesty that has been long overdue. With an accompanying cutesy lyric video, "Not Even The King" revives the urgency and heartfelt soulfulness that Keys has always had, but has since been negated to front lackluster material in recent years. Nary a screech or an out-of-place warble is to be heard on this, even Keys talent to wax poetic is reignited, proving that she still knows how to craft a taut lyric. See, I like it when Keys takes things delicately, not straining her voice, or crippling herself by indulging in generic whims. It reminds me of why I've been sticking with her since Songs In A Minor and why I will continue to do so as her career rolls on. Get crowned and kissed after the bounce.

TAGS:  alicia keys, audio
Previous: Abiah Gives Us A ‘September’ To Remember Next: Morning Soul: Never Ever Should Have Told You