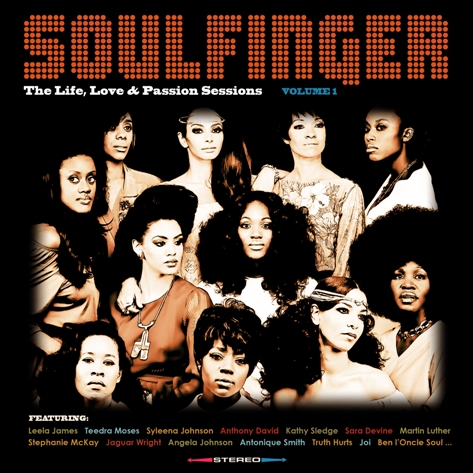 The best musical discoveries are the ones that seemingly come out of nowhere and take you by complete surprise. That was the case with Soulfinger: Life, Love & Passion Vol.1, a compilation of classic soul tracks, performed by some of the best indie soul artists around today. There is very little information on the collection to be found online, in fact the only reference to it I could find was the Soulfinger Music Soundcloud page but, as it contains all 15 tracks, then we can't really complain. There is no word on if/when it will get an official release, but until then I suggest you bookmark the page and dive in. The covers in question are a varied bunch, but the one thing they all share in common is the absolute quality of the updated renditions. Anthony David shows why he is often compared to the great soulmen of yesteryear as he kicks things off with a heartfelt version of the Tyrone Davis R&B hit, "Turn Back the Hands of Time" and Angela Johnson gives us a glimpse of her inner diva on a cover of Aretha Franklin's "Love the One You're With." Dusty Springfield's "I Just Wanna Be There" gets a fiery remake courtesy of Jaguar Wright and Teedra Moses busts it out on Vicki Anderson's "Message From the Soul Sisters." It's nearly a three-way tie for my favorite cover of the collection, but Joi's stunning vocal on a cover of the Three Degrees "If & When" just about tops Martin Luther's take on the Hall & Oates classic, "Sara Smile," and Ben L'Oncle Soul's version of Sam Cooke's "Nothing Can Change This Love." With tracks from Leela James, Syleena Johnson, Truth Hurts and more rounding out the set, this is one compilation you will not want to miss. Let your Soulfinger glow after the bounce.
Center