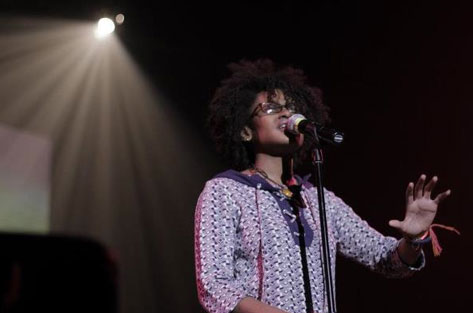 2012 will likely go down as a year singer Gwen Bunn will always remember. She's made multiple appearances on BET's 106 & Park's "Wild Out Wednesdays" segment. "Every Time I See You," a guest spot on Darryl Reeves' Mercury was easily one of the album's standouts. She's opened up for Mushinah and been co-signed heavily by Phonte, even joining him in the studio recently to work on what's sure to be something dope. And to top it off, she just hit the ripe old age of 21. Though short on age, Bunn already has several years on the local music scene in Atlanta under her belt, including the release of her stellar self-produced debut The Verdict back in 2009. It seems that the world is finally ready for what the supertalent has to offer. As she gears up for her next full-length release, Melody Dungeon, she offers up a taste of what to expect with the album's second single, "Death to Me." The uptempo tune showcases the same mature beyond-her-years songwriting that has kept The Verdict in heavy rotation on my iTunes for over two years. Hear her in action after the bounce and ready yourself for what this young lady is bringing to the table.