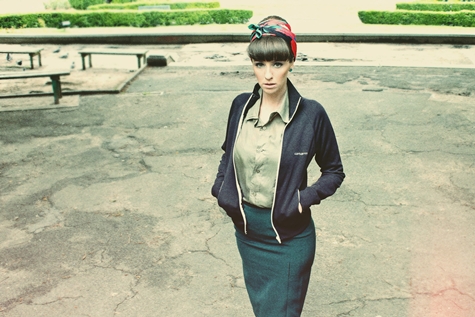 The first I'd heard of the name Milla Brune was right here on SoulBounce, just last month when we featured the soul compilation Soulfinger: Life, Love & Passion, Vol.1. Although I fell hard for the compilation and pretty much all the covers featured on the album, there were a few that stood out -- one being the cover of the Stevie Wonder and Syreeta Wright track "To Know You Is To Love You" by Ms. Brune. Her vocals on the cover were so flawless and unique that I found myself hitting repeat again and again...and again. Cue me putting on my musical detective hat (in other words googling like a mad woman) to find out a little more about this lady with the chic sounding name.
Center
After the bounce

As it would turn out, Milla Brune is a singer who's as interesting as her voice. Hailing from Belgium, she has spent time touring with world music artists like John Arcadius and Zap Mama, as well as with the late Guru, before deciding to focus on her own solo project. That project being her recently released EP, The Other Woman, which perfectly showcases the talents of Brune, as well as her wide ranging influences and musical experience.

The Other Woman is made up of six tracks that blend yet individually each lean to different elements of soul, jazz, pop and indie music. However, one consistency in the EP is Brune's exquisite use of harmonies and her own vocal styling. She also manages to fuse the old and the new on this EP, whether it's the jazz sensibilities of the title track where she incorporates modern vocal arrangements with strings and an upright bass, or on "Solitude" with its driving beat and synth sound or on the lead single, "Struggling," where she goes into acoustic pop territory while allowing the fragility of her voice to be the star. From vulnerable to strong and painfully honest, The Other Woman is a beautiful body of work that reminds me of the old adage "less is more." Sometimes the minimal, simple approach is the best, even in music.

Have a listen to The Other Woman and check out the music video for "Struggling" as well below. I'm quietly confident that you'll have Milla Brune as your soundtrack for a lazy Sunday afternoon.


TAGS:  audio, Milla Brune, stevie wonder, syreeta wright
Previous: This New Ne-Yo Track ‘Should’ Make Some Of ‘You’ Happy Next: Aaron Camper Shows Us What ‘Madness’ Looks Like