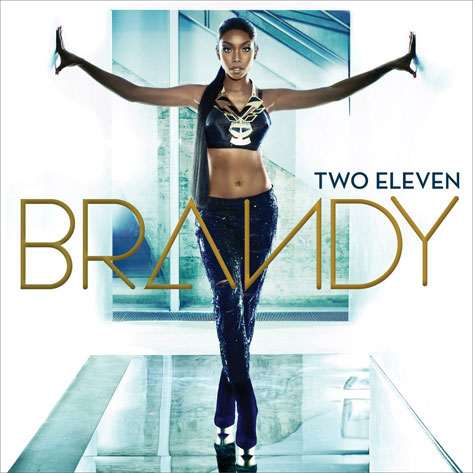 In the late 1990s, Brandy Norwood and Aaliyah began moving in parallel future-R&B paths, spurred by the latter's genre-redefining One In A Million album. Aaliyah's more adventurous beat selections were offset by her ice queen vocal delivery, while Brandy's more conventional beats gave her complex vocal arrangements room to weave, dip, and reverb from left channel to right. With Aaliyah's untimely death in 2001, Norwood became the unofficial standard bearer for the sound, best crafted for her by Rodney "Darkchild" Jerkins (and later by former Aaliyah collaborator Timbaland). After her creative peak on Afrodisiac was rendered DOA by scandal, her career all but obliterated by tragedy, she released Human, a toothless mea culpa of a record seemingly existing only to make nice with the Pop and AC audiences that once hung on her every word.

Four years on, she returns with Two Eleven, a record long hyped as a return to her futuristic R&B roots. But why anyone's still selling the idea that robot voices and random sonic blips qualify as "futuristic" in 2012 is beyond me. Two Eleven could easily have been made a decade ago -- which, considering the horrendously dated late-'90s sound of the Human single "Right Here (Departed)," sounds far worse a premise than it actually is. In fact, the set feels more timeless (in a thoroughly contemporary sense, to be sure) than dated.

Still, it's fun checking off the decades-old references on the album -- from Michael Jackson's darker moments ("Wish Your Love Away") to Sade's "Love Is Stronger Than Pride" reimagined as a babymaker ("Paint This House"), to 2004-era Timbaland (bonus track "Can You Hear Me Now," where Nate "Danja" Hills does little to shed the Tim-apprentice label), to the very inclusion of intro and outro tracks on the set. Still, its greatest slice of recent-retro R&B is undoubtedly "Slower." If you thought "Wildest Dreams" played to her strengths, this Switch-produced cut feels like it was crafted solely for Brandy to show off her utterly inimitable vocal runs and melodic idiosyncracies. With its blippy, frenetic pace, remiscent of late-'90s Soulshock & Karlin (and the way she slays every available note) it's the record 702 wish they were capable of making in 1999.

The problem? It's one of the only few potential singles the album has to offer. The Bangladesh-produced "Let Me Go," charming as it may be (with lines like "If mama saw that side of me, she would be on Twitter"), isn't viable without a video packed with choreography the likes of which I doubt Ms. Norwood could deliver. "Never Too Late" feels crafted for the charts, but despite her committed vocals, it falls into that murky Stargate/Rico Love/DarkChild purgatory of generic R&B-pop balladry. And the much-anticipated "Scared of Beautiful" ends up entirely too conventional a ballad for the melding of such distinctly gifted masters of melancholy as Brandy and Frank Ocean.

Is it a weak -- or even mediocre -- album? Hell no. It's actually kind of masterful, despite a dearth of singles reminiscent of Beyoncé's 4. But Brandy is the first to admit that she doesn't have Beyoncé's career right now. A more apt comparison would probably be to an early-2005 Mariah -- prepping for make-or-break comeback attempt after a major public fall. And you may recall, the most biting critique anyone could muster for Emancipation was that it was too packed with singles. Two Eleven is a triumph in consistent and cohesive quality -- but while it has less filler than even the aforementioned Afrodisiac, there's no track as instantly catchy as "Full Moon;" none burning with the theatrical pathos of "I Tried" or the understated smolder of "Who Is She 2 U." It makes you wonder what might have been if an invested Jerkins or the real Timbaland had made an appearance.

Still, whether or not this is the album that restores Brandy to her former chart dominance (we hope it is, but we bet it isn't), Two Eleven is a welcome return to form for one of the most underratedly dexterous vocalists of her generation.