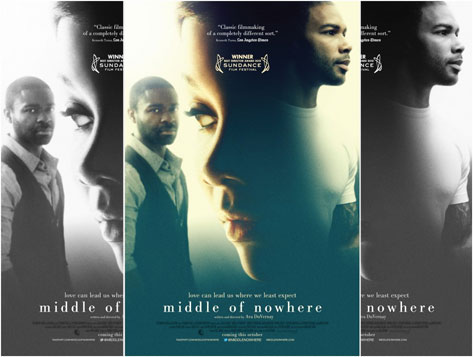 What do Oprah Winfrey, TV One Verses & Flow series host Omari Hardwick and Bounce-Worthy all-stars like Little Dragon and Ra-Re Valverde have in common? The answer is Ava DuVernay's 2012 Sundance Film Festival award-winning independent film, Middle of Nowhere. Opening in select theaters today, Middle of Nowhere stars Emayatzy Corinealdi, David Oyelowo, Lorraine Touissant and the aforementioned Hardwick. The film, deemed "soul-stirring" by the New York Times and recently endorsed via Twitter by Oprah, follows a bright medical student named Ruby who sets aside her dreams and suspends her career when her husband is incarcerated.

Of particular interest to SoulBouncers will be the movie's soundtrack. Pieced together by music supervisor Morgan Rhodes, the film's music playlist boasts a host of indie soul gems including "Bitter" by Meshell Ndegeocello, "Play" by Goapele and tracks by JimiJames, Natalie Gardiner, Fink and more. The movie's distributor, the African-American Film Festival Releasing Movement aka AFFRM, is giving away a free soundtrack sampler to anyone who tweets a picture of their opening weekend ticket stub. To get this sweet deal, simply tweet your photo to @AFFRM with the hashtag #MIDDLEMusic and you'll get hooked up. Watch a preview of Middle of Nowhere in the trailer right here, and be sure to visit the film's website for more information on when and where you can catch it.