Usually I don't take too much stock in YouTube comments, but there are rare occasions where nuggets of wisdom do get passed around below the video. With regard to Roses Gabor's debut single, "Stars," some YouTube savant mentioned that if Rihanna or Britney Spears had "sung" atop on this glorious beat that it'd be a top Billboard hit with the quickness, and, well, I'd have to wholly agree with that. It's the sad but true observation to the essence of our times, as mediocrity tends to shut out excellence every single time. Still I don't think Ms. Fenty or Ms. Spears could handle all this dopeness as Gabor gives us a three course meal -- not an appetizer. Gabor works her honey-drenched coos deliciously over this Redlight-produced cut and it just melts in with the schizo R&B throbs that are spread amply about. The Londonite sure has come a long way since releasing her debut mixtape, The Wonderful World of Roses Gabor Vol. 1 and guesting on the excellent SBTRKT cut, "Pharaohs," and it's why I'm all psyched to hear more of her. Well, I guess you can say I'm in luck, as I do see more of her in the companion visual for "Stars" as she multiples and divides herself among backdrops of shimmering universes, beaches and glacial mountaintops to an cerebral effect. While we wait for the Stars EP to arrive this November, set adrift on atmospheric bliss by gazing at Roses Gabor's "Stars." 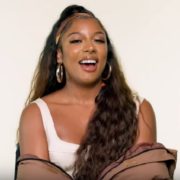