What Solange Found By ‘Losing You’ 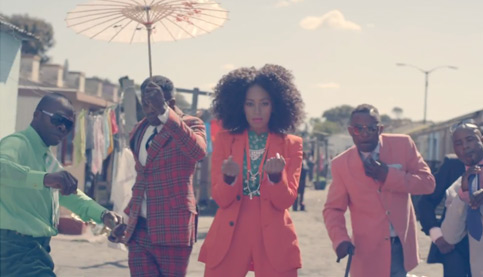 Only a few weeks after teasing her new single with a sexy
40-second sliver of a video, Solange
Knowles
delivers the full visuals for "Losing You." And oh
man, does she deliver. On the Blood Orange-produced
cut, Solo tamps down her usually hyper-expressive vocals for a more subdued, metronomic
delivery that's part Terence Trent
D'arby
, part Ready For The World.
Lacking a formal verse-bridge-hook structure, "Losing You" is more of a languid
groove -- dancing between '70's disco and '80's new wave in that space where she
can, in true Solo bravado, deliver the threat "I'm not the one that you should
be making your enemy" (twice, to boot!) and sound emotionally vulnerable.


Visually, it's nothing if not beautifully shot, and a testament
to how far Knowles has come into her own. Every look is styled to
boho-retro-print-obsessed perfection, and yet looks like it came untouched from
Solange's closet, further cementing her place as the most authentically
fashionable woman in popular music today. And while director Melina Matsoukas may bristle at allegations
of unoriginality (yet again) -- Mark Romanek
did '70's-style US-SA fusion with Janet
Jackson over a decade ago -- she should be lauded for her approach to
portraying Africa, especially in light of the Nigerian backlash
against Rick Ross' recent,
self-aggrandizing poverty-porn video for "Hold Me Back."

Solo and her crew of ultra-stylish friends bounce from
one Cape Town
location to the next, neither whitewashing real economic and
infrastructural shortcomings nor glorying in them. As they go from one spot to the next (each one made editorial-ready by Matsoukas' high-exposure,
desaturated hand), you're left feeling there's definitely some development
needed, but not so much that you'd never consider visiting for any purpose
other than the humanitarian. And considering the way the African
continent is far too often portrayed, that's no small feat for a pop music
video.

Yes, the clip accomplishes what it set out to do in that it
lets us know Solo is back in the game. But on a temporal level, that expression
is somewhat lacking. Her return to the scene is made impactful in
no small part by the respect she's accumulated for her work both
creating music and developing a brand over the last four years -- something even
Knowles will attest to in comparing her relationships with producers from then
to now. For me, it boils down to something as simple as the early-morning
message I received from my musical mirror-image, whom I had been trying in vain to sell on
Knowles since "I Decided" first wormed its way into my head in 2008. It simply stated: "Solange's 'Losing You': Cool video. Dope a$$ song!!"

I'll be expecting thank you notes from all newly-airborne pigs.