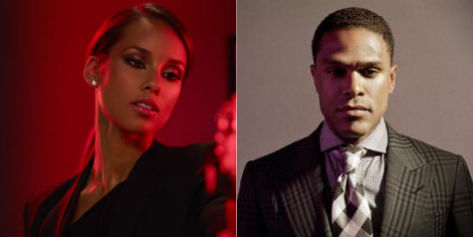 If Alicia Keys' "Girl On Fire" didn't quite light yours and you've been on the fence about buying her new album of the same title when it is released on November 27th, then let this song be the one to make you strike the match. Keys managed an up-until-now impossible feat and talked Maxwell into singing with her on the track "Fire We Make," which holds the dubious distinction of being Max's first duet ever. Yes, ever. If that's not enough to have you clamoring to press play, then let the knowledge that this is one smoking hot track be all the incentive you need.

Alicia starts it off with some husky whispering before singing her verse on the Swizz Beatz-inspired love song. Her man might be the inspiration, but Maxwell is the man who owns this. When he starts singing, he shuts it down and totally upstages Mrs. Keys-Beatz on her song. His falsetto is in its finest form and sounds nothing short of amazing. They join together at the song's climax and their voices blend well, although, here again, Maxwell overshadows his partner. A guitar solo by Gary Clark Jr. takes the song out, adding to its sensuality and resulting in the perfect denouement. We didn't think that we'd get any new music from Maxwell this year, so "Fire We Make" is the most pleasant of surprises.