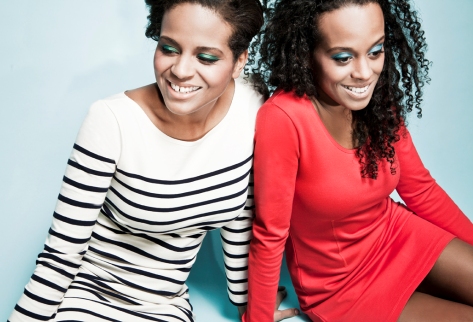 The Thiams, made up of sisters Boussa and N'gone, are a talented sister-duo who hail from Berlin, Germany. They formed their group 5 years ago and settled on using their surname after an inquisitive waitress asked what they were called. They don't have much in the way of released music as yet, in fact they only have one track up on iTunes, the insanely catchy "No Loosers" which was inspired by Paris Hilton, of all people, but they are planning on releasing another at the end of this month and hopefully an album to follow. You can peep the duo's EPK here where the ladies discuss the idea behind their debut single "No Loosers" (the video for which is after the bounce), their refusal to be tied down to one genre (they call their music "circus soul"), their working relationship and their particular brand of "tongue-in-cheek" humor. Last year saw them support Raphael Saadiq and, with more shows in the pipeline, here's hoping that The Thiams get the recognition they deserve. As an added bonus, and to prove that these ladies are definitely not hiding behind that well-displayed humor, you can peep their cover of the Beatles "Oh Darling" and one of their original tracks after the break. Yes, these ladies can blow!
Center