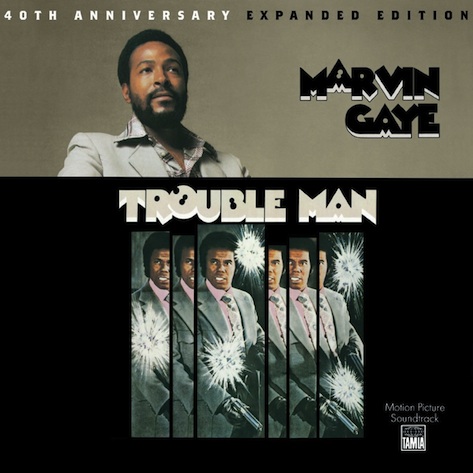 When it comes to music, especially soul, I have always insisted on reaching back and discovering older music. There is nothing more exciting for me than coming across an artist or a song from the past on YouTube or Spotify and figuring out how they fit into my preconceived notions about the linear history of soul or jazz. There is an embarrassment of riches in soul that has not been discovered by many of my peers. My last discovery was Mother's Finest (and before Syleena Johnson can even think about being "unsung" she needs to listen to MF's lead singer, Joyce Kennedy) and my newest discovery is Marvin Gaye's Trouble Man: 40th Anniversary Expanded Edition. This two-disc anniversary edition, released November 19th, is complete with alternative takes, instrumentals and the original film score.
Center

In the early 1970's, one of the hottest tickets in town was a soundtrack album. Isaac Hayes had Shaft in 1971 and Curtis Mayfield had Superfly in 1972 (and later Claudine with Gladys Knight & The Pips and Sparkle with Aretha Franklin). Marvin would follow with his soundtrack album based on the Blaxploitation film of the same name, Trouble Man. With Gaye producing, arranging and providing most of the vocals, this album is another snapshot of his genius when many probably thought it couldn't get any better than What's Going On. The mostly instrumental album is gritty, funky and soulful. It's a shame that instrumental R&B work is not as prevalent as it once was. From 1970 to 1993, there was even a category at the GRAMMYs for Best R&B Instrumental Performance with past winners ranging from Herbie Hancock to Soul II Soul.

I may have not recognized tracks like "Main Theme From Trouble Man" and "Poor Abbey Walsh" by name, but they became instantly recognizable in an almost déjà vu sense. Further, the album truly shines when Marvin adds his trademark, two-step inducing, bluesy vocals, like on "Trouble Man." After listening to a couple instrumental tracks, the vocals pleasantly jump out at you. While the beginning of the album is marked by diverse instruments, on "'T' Stands For Trouble" Marvin adds a synthesizer that augments the album's funk undertones. Part Miles Davis-cool, part melancholy, Trouble Man covers jazz, funk, blues and R&B with ease.

Trouble Man is a great example of the artistry of Marvin Gaye. His addition to the classic period of the innovative, socially-aware soundtrack album format in the 70's on the heels of Isaac Hayes and Curtis Mayfield is distinct. While other albums are crystal clear in their message about social oppression and the plight of the Black community, Trouble Man is unique in that it allows the listener to make their own interpretation, like a piece of visual art, of what is truly happening.