Rihanna & Chris Brown Put Their ‘Business’ In The Streets 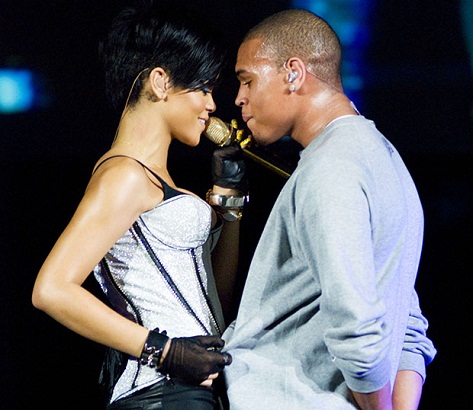 I already know what you're thinking: Rihanna and Chris Brown on SoulBounce at the same damn time?! No, you didn't come to the wrong site and, though the Mayans predict that it would happen next month, it's also not the end of the world...yet. What is going on is that the controversial duet "Nobody's Business," from Rihanna-bot's upcoming seventh (!!!) studio album in as many years, Unapologetic, has hit the streets. Basing the entire song on a throwaway ad-lib from Michael Jackson's "The Way You Make Me Feel," the terrible twosome wax somewhat poetically about how their publicity stunt love affair "friendship" is their business and theirs alone (ignoring the fact that they constantly talk about it on Twitter and have even gone as far as making a short film about it). Besides having the dumbest lyrics this side of Right Said Fred (sample: "Your love is perfection / Please point me in the right direction / I'mma give you all my affection / Every touch becomes infectious / Let's make out in this Lexus"), the disastrous duo attempts to pay homage to MJJ with the subtlety of a jackhammer, Auto-Tuned whoo-hooing and hollering all over the place like wounded puppies in heat. All that aside, I'd be lying if I said the song wasn't at least a little catchy thanks to fun production reminiscent of early '90's pop/R&B hybrids and a slightly comical (and earworm-y) refrain, which means that we can look forward to hearing this one incessantly on all media formats for months to come thanks to RiRi's unrelenting payola marketing team. If you have an extra four minutes that you wanna kill, feel free to check out "Nobody's Business" after the bounce. Just know that it'll be stuck in your head for a week after.