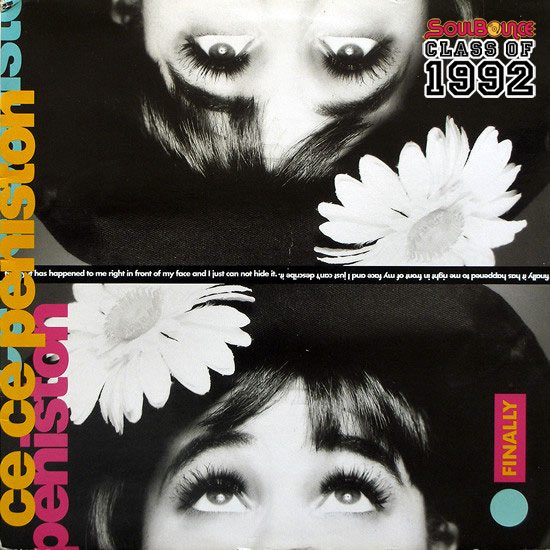 Of all the euphoric jams about that light-bulb moment of love, nothing beats "Finally." Once the garbled scatting comes in with CeCe Peniston gushing about some "coca brown skinned and curly black haired" Adonis, you're unabashedly hooked. Plus you wish to join in her euphoria, even though you're knocking at the door of "forever alone" (insert Joan Clayton sob). Still, everyone should be able to have this feeling once -- maybe even twice -- in life. As it is embedded in my '90's childhood memories, there are times where I yearn to have been just a decade older in order to fully embrace this in the clubs, as it seems my Gen-Y crew hangs onto pretension with clutched fists making songs as simple and as jubilant as "Finally" on the verge of being an extinct species. Thankfully, the track and its namesake album is a time capsule of its era with nary a shred of a pretentious agenda laced in its make-up, and it's something I'm thankful for in my roaring recession-riddled 20's.

Hailing from Phoenix, Arizona, Peniston took pen to paper during a college class and exuberantly brought house music to a mainstream format when she wrote "Finally." Like Deee-Lite and Crystal Waters achieved in 1990 and 1991 respectively, CeCe's debut bridged those gaps and made a subterranean genre marketable. Finally plays a dual role at being a house album on one end and a cruise-controlled New Jack and R&B set on another and fluidly achieves. Notable names like Steve "Silk" Hurley, DeVante Swing, Chantay Savage, Kym Sims, David Morales, and Denise Rich pop up on the credits, giving the album its genre-bending ways, but this is all CeCe's show.

To say that this album isn't infectious is just a Pinocchio incident waiting to happen. I never had a problem with any song on here, so this recall is bathed in bias (ha!) and while it's debatable if this is one of the greatest house records to be made, but for me, it's the most accessible and probably most memorable as it spawned a number of hits that sent the album to gold status. Going beyond its namesake, "We Gotta Love Thang" trumpets its way in with jubilant flair, as "Lifeline" bayous itself in a deep house crevasse that is cool and collected. The crackling top 20 hit, "Keep On Walkin'" rivals "Finally" at being an equally melodic stomper, just the tables have turned with it being a brush-off to a relentless ex-beau.

Quiet Storm numbers like "Inside That I Cried" and "You Win, I Win, We Lose" cool things down and give full warning that CeCe can rouse up a searing vocal performance, proving she's not a one-trick-pony. Actually, one of the best numbers (and my personal favorite) that showcases CeCe's range is "Crazy Love," which had the poor fate of being the final single that ended up being buried on the charts. Shame, considering how jazzy-smooth and sublime this gem is.

CeCe has attempted a comeback in recent years, and currently she plans to release CeCe, 16 years after her 1996 supposed curtain call, Movin' On. While CeCe released the goodie bag follow-up, 1994's Thought Ya Knew, it's Finally that has surprisingly held up well and is still ever an instant party when you pop it in.

While there were other prolific "wailers" from the house/club music movement, with Martha Wash and Jocelyn Brown being the queens of them all, CeCe Peniston was sort of the "Princess of House" as she navigated the genre with ease, but also shook up the formula to appeal to pop and R&B markets. Most soul purists sort of sneer to that act of genre tampering, but this is sort of a ladylike middle finger to that, that pop and soul can mate and make a feisty little baby by the name of Finally.