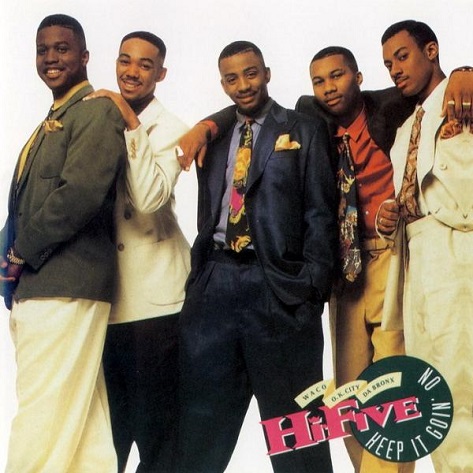 Ever since the success of The Jackson 5 it seems that every record label has tried to reinvent the boy band (to varying degrees of success). By 1990, it seemed that new successors Hi-Five, with songs like "I Just Can't Handle It," "I Can't Wait Another Minute" and, most importantly, "I Like the Way (The Kissing Game)," had what it took to make just as great an impression. Their self-titled debut, helmed by super producer Teddy Riley, showed that the Waco, Texas, natives could bring a boyish charm to the New Jack Swing sound. Needless to say, the album's platinum success and rise up the Billboard charts set high expectations from fans and their label Jive for its 1992 follow-up, Keep It Goin' On.
Center

With the album's lead single, "She's Playing Hard to Get," it seemed those expectations would surely be met. Upon its release, it shot to the top of the charts, peaking at #5 on Billboard's Hot 100 and #2 on the R&B charts. While not quite as high as "I Like the Way," it was definitely a promising outcome. Piggybacking on the boy-next-door vibe of "I Like the Way," the song was another showcase for then-17-year-old lead singer Tony Thompson's high-pitched lead vocal. Though its accompanying video, steeped in the New Jack Swing tradition of video girls in skin-tight clothes, was a bit mannish, the song itself was a fairly innocuous ditty about crushing on that special someone. Most of what else followed could be classified the same way. Sure there was some innuendo, but rarely did it ever reach the lascivious heights of contemporaries like Jodeci or R. Kelly and Public Announcement.

Speaking of Mr. Kelly, with this album the guys of Hi-Five traded one hot producer for another, as this was one of the first projects to see R. Kelly's hand as a songwriter and producer (his stamp appeared on four of the nine songs featured on Keep It Goin' On). Second single "Quality Time" had all the hallmarks of a Kelly production: the spoken monologues, bump-and-grind ready groove and Aaron Hall-isms all bleed through. In fact, it could be argued that it erred a little too close to Kelly's formula, especially with Born Into the 90's having been just released a few months earlier. Still, that didn't stop the song from peaking at #38 on the pop charts and #3 on the R&B charts.

Elsewhere on the album, the boys kept it business as usual. The topic of the rest of the songs rarely veered from their love of the ladies, save the introspective "A Little Bit Older," which touched on living on the road and featured a section with the crew voicing their thank yous to those who've helped them along the way. Tender ballads "She Said," surprisingly the only song dealing with heartbreak, and "Fly Away" supplied the slow grooves needed to balance the album's energy. After that, and just past "A Little Bit Older," lay New Jack Swing party starters "Mary Mary," title track "Let's Get It Started (Keep It Goin' On)" and "Video Girl." These songs were all great, but were definitely album tracks (though "Mary, Mary" was inexplicably released as a single in 1993). However, album closer "Whenever You Say" was on should've-been-a-single status. With its tight harmonies and production reminiscent of Ralph Tresvant's "Sensitivity," it definitely would've had the chance of a good run on the charts.

Hi-Five isn't as celebrated as Boyz II Men, that other male R&B quintet of the early '90s, and that's a shame. Though they didn't have the latter's chart success, Hi-Five was able to put out fun, quality music consistently without having to rely on the schmaltzy (and, at times, overproduced) ballads that were BIIM's bread and butter. True enough, Keep It Goin' On would not equal the success of its predecessor, peaking at only #82 on the Billboard 200. Still, it was successful in its own right and, along with Hi-Five, helped establish a fun-loving type of R&B that would inspire quite a few groups that came in their wake.

Though they started off burning bright, the end of Hi-Five wasn't as glorious as its beginning. The group would make one more album, 1993's Faithful, before disbanding in 1994 and paving the way for Tony Thompson's 1995 solo debut Sexsational. It would reform once more in 2005 -- with Thompson plus four new members -- before Thompson's untimely death in 2007. The latest incarnation of the group doesn't feature any of Hi-Five's original line-up and, though they might be good, I doubt they'll be able to capture the magic the guys found in their early '90s heyday. Luckily, we have albums like Keep It Goin' On to remember them by.

Hi-Five Keep It Goin' On [Amazon][iTunes][Spotify]