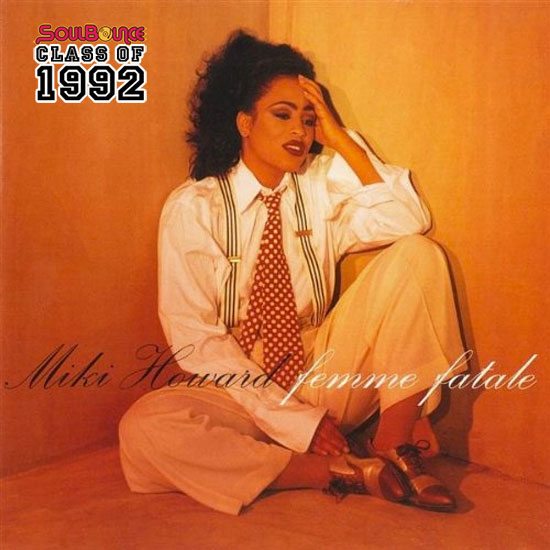 Miki Howard. The first word that comes to my mind is "moody." It has been obvious that Miki was a jazz singer since her 1986 debut album, Come Share My Love. Some of the strongest tracks on her albums have been standards that have channeled deep-voiced chanteuses like Billie Holiday and Dinah Washington. Miki even played Billie Holiday in Spike Lee's Malcolm X in 1992. In retrospect, I was always impressed that she could consistently live in two musical worlds that were increasingly finding space between them: jazz and R&B. Other jazz-influenced singers, such as Nancy Wilson and Phyllis Hyman, created their own mixture of urbane, sophisticated R&B in the 1990s much like Howard did on her 1992 release, Femme Fatale.

Miki's Femme Fatale is a great example of an artist staying true to her inspirations and almost daring R&B fans to keep up with her blended style. Starting the album with two jazz standards is a mood-setting statement that eases listeners into the album. The arrangements chosen for her songs have always suited the rich tone of her voice. Miki creates such an organic and natural sound on "Good Morning Heartache" and "This Bitter Earth" that I am sure some listeners were surprised to learn that these were not original recordings. One of the most important factors in blurring the line between R&B and jazz with a cover is song choice. Both tracks fit in nicely with the rest of the album.

The third track, "Hope That We Can Be Together Soon" featuring Christopher Williams, itself a cover of the chart-topping song by Sharon Paige and Harold Melvin & The Blue Notes, signaled a sharp shift of the album towards R&B. To me, nothing is more Miki Howard than "Love Under New Management," but the melancholy "But I Love You" serves up another story of a woman not satisfied in a relationship. The commercial and critical standout track, "Ain't Nobody Like You," topped the Billboard R&B charts with a morose, temperamental confession of a woman unable to shake the hold a lover has over her.

The frustrated, isolated photograph of Miki on the cover of Femme Fatale truly embodies every song on this album whether it represents a woman distressed or a woman looking to break through her own misery ("I've Been Through It"). Through troubles with relationships, reputation and drugs, Miki Howard has seen the best and worst of the music industry. She has gone on to release several albums that focus on jazz like Miki Sings Billie and Private Collection (check out "Favorite Time of the Year," my personal favorite) and a GRAMMY-nominated R&B album, Three Wishes. Seeing Miki tell her story on TV One's Unsung painted me a new picture of Miki Howard and helped me find a new appreciation of her music. In a crowded year where many artists were just getting a grip on the sound the '90s, Miki Howard's Femme Fatale is truly consistent to the sound she had been putting out since 1986. That may be the album's biggest accomplishment of all.