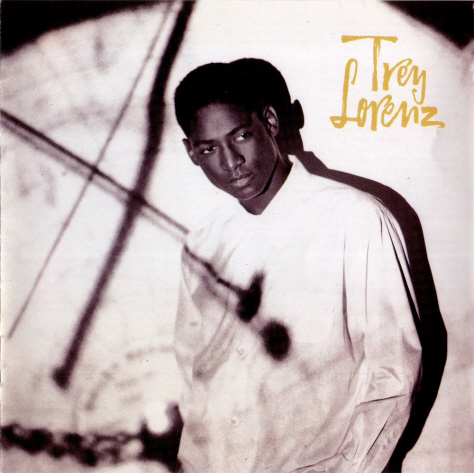 Under the glittery, butterfly printed umbrella of Mariah Carey stands Trey Lorenz. Go on and name any tune that Carey has smeared her soprano on and chances you've heard him, and you've heard him loud and clear. Since day one, Lorenz has been Carey's trusted back-up vocalist as he was supporting the singer for her first promotional tour in 1990. Yet, Lorenz was one of the lucky few who had talent and charisma to extend beyond his post, and in 1992, Lorenz went from being "that guy behind Mariah Carey" to a solo star on his own merit.
Center
After the bounce

Lorenz's journey from the background began when he saddled up alongside Carey for her 1992 MTV Unplugged special where together they churned out The Jackson 5 classic "I'll Be There" as a romantic duet. It was a surprising venture at the time, as the chart-topping Carey chose to duet with a relative unknown, as well as had the guts to cover such a precious classic of the soul genre. Yet, the end result was another #1 hit for Carey to put in her pocket and for the spotlight to be shone on Lorenz and his vocal talents. Any tone-deaf glob could hear that the chemistry between them was undeniable and that Lorenz held his own against the songbird, complementing her at every turn. In fact, no other male singer has complemented Carey better other than Lorenz, and, yes, I say that while hiding behind a table waiting for the flying tomatoes, cell phones and sputters about Carey's other male duet partners like Luther Vandross, Boyz II Men and Eric Benét.

With the success of "I'll Be There," it was just natural for Lorenz to have an opportunity to emerge from the shadows and the experiment to see if the former background singer could rise as a solo artist was conducted through his 1992 self-titled debut. Though sales were dismal for the album, as it just skimmed the Billboard Top 100, the numbers shouldn't distract from the fact that on his debut Lorenz puts on a vocalizing clinic while running through a solid collection that waffled between contemporary feel-good uplifts and light FM slow jams.

Trey Lorenz plays smooth and safe, thanks to production being handled by the expert hands of L.A. Reid, Walter Afanasieff, Glenn Ballard, Mark Morales, Keith Thomas, BeBe Winans and Madame Butterfly herself. For Carey, the roles are reversed here as she becomes backing vocalist to Lorenz and is unmistakably so on several tracks, plus she takes a co-write credit to two numbers present.

One of the fruits of their collaborative labor is the first single and #5 R&B hit "Someone To Hold" and a perfect introduction it is to Lorenz's vitality. With one listen to "Someone To Hold," I was flooded of memories of how tangible and sincere a love song it is and Lorenz sings it just beautifully. "Photograph of Mary" was also shopped as a single, and its house-lite lean and melodic harmonizing makes this song one of the highlights on here. It's just a real shame that it only squeaked in at #46 on the R&B charts because it's a favorite R&B jam of mine.

As the lush "Someone To Hold" was the anchor ballad here, Lorenz doesn't slack off in other tastes of balladry. His reading of the 1976 Commodores' hit "Just To Be Close To You" is by far one of my favorites, and dare I even say that Lorenz not mimicking the country drawl of Lionel Richie's gives this song a fresh new coat of paint. "Always In Love," yet another Carey-penned number, smolders along nicely with "How Can I Say Goodbye" interjecting some vintage doo-wop sensibility. Channeling some Marvin Gaye tones in the verses of "Baby I'm In Heaven" shows off Lorenz's vocal versatility. He closes things out on a shivering note with the spiritual "When Troubles Come," and he carries the song with BeBe Winans on the unwavering back-up.

Lorenz is not all docile as he does flex some New Jack Swing muscle on the vibrant "Wipe All The Tears Away," as well as hits a sweet pop spot on the urgent "Run Back To Me", both fun numbers that shake up the serenity of the majority of slower material present.

Ask most people and Trey Lorenz is a somewhat misbegotten effort, lost in the conversations of '90's flashbacks and suffering an unfair fate of being shoved in used CD bins. Yet I like to look at used CD bins as priceless treasure chests of sound, as I rescued my copy of Trey Lorenz from one and have always enjoyed giving it a spin every now and then to take me on a time warp to the 1990s (and man, do I miss the '90s).

Picking up the album today, Trey Lorenz is a true relic of its era, and it's the kind of album that isn't really done anymore. Heck, a lot of people don't really attempt to sing like Lorenz anymore. But this album gives inkling to a time where artists really gave a damn about making a good impression with well-organized and thoughtful material. It may not have been the flashiest album or the most hit riddled, but Trey Lorenz holds place in the heart and those are always the best albums to me.

Though Lorenz's time in the forefront was sadly short-lived, his drive hasn't slowed down as 2006 saw him return to the solo tip with album Mista Mister, and he is still a prominent fixture of Carey's vocal backdrop and the two remain BFFs to this day. Still no matter where we'll see Lorenz next, one shouldn't bypass this underrated jewel of the peerless '90's R&B era.