Home Art & Soul, I Was There, Soul Fashioned 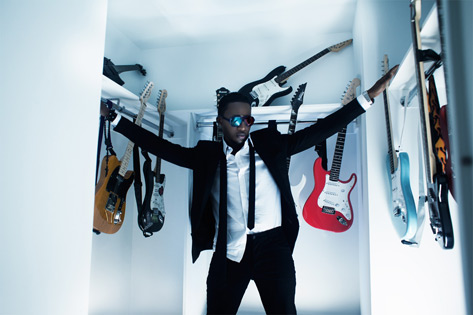 Music plays a crucial role in every part of my life. From when I wake to when I crash at the end of the night, I'm fortunate enough to have very few moments unaccented by songs I love. I couldn't imagine life any other way. This is why I write for SoulBounce. But when I'm not trolling the halls at SBHQ, I'm indulging my other passions as a creative director and photographer. Thankfully, these two worlds collided recently.
Center

Months after we bestowed Bounce-Worthy status on Nigerian
singer/songwriter Bez, his management saw some of my work and asked me to shoot
him. The resulting photos ended up a cover and five-page editorial in
Applause Africa magazine. I wanted the editorial, inspired by rock's most
tumultuous love affairs, to tell a story of excess, co-dependence and an all-consuming passion. To
achieve that, everything would have to be perfect: location, props, styling and, yes, the soundtrack. As I cobbled together the narrative, assembling looks
with the stylist and deciding which exotic fish screamed "badass" the loudest,
I spent days putting together a soundtrack to set the emotional tone on set
from one scene to the next.

From the decadent stomp of fast rock star living, to the despairing
crawl of a poisonous yet addictive relationship, this is the soundtrack to the
story, Heartbreak Hotel. 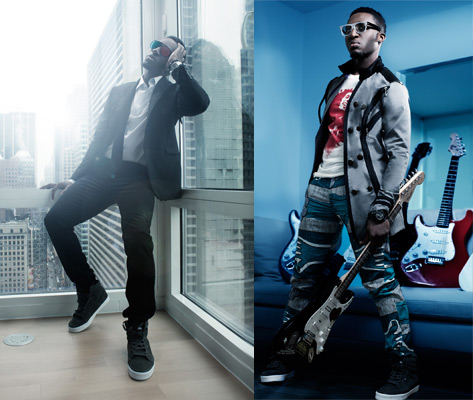 Here's where we're introduced to our fast-living rock star.
This is a guy who has baby sharks swimming in a Veuve Clicquot-filled fishbowl,
so I needed a soundtrack that conveyed exuberant excess, grungy glamour and a
healthy dose of danger. Lenny Kravitz and Van Hunt were obvious choices (in
fact, Popular, where Hunt is at his
douchebag-dandy best, could've played in its entirety during this shoot). But
Goldfrapp's "Ooh La La" and Kanye West's "All of the Lights" were key additions, offering two
very opposite sides of the same cocaine-chic coin.

Winning Music Moment:
Bez, looking every bit the Afro-rocker in tight print pants and a military coat, surrounded
by guitars perfectly matching his look as "Windeck" by Angolan artist Cabo
Snoop plays. That song is absolutely the aural equivalent of those damn pants. 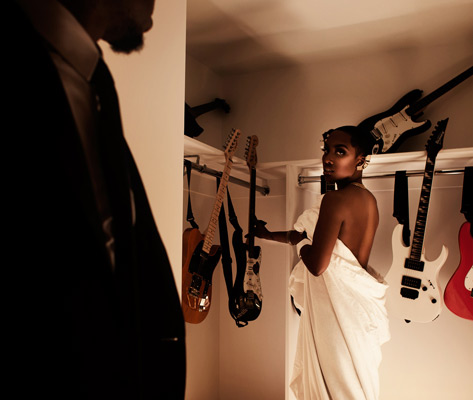 Here, we discover Bez's groupie/lover/obsession (played by
Jamaican stunner I'Yana), who has broken into his penthouse suite and is hiding
in his guitar closet. (Because seriously, who doesn't have a walk-in guitar closet?)
Starting out with the sexy strut of Babyface's "There She Goes" and Ryan
Leslie's ode to the jump-off, "You're Not My Girl," the playlist revels in the
seductive power of a woman. But once Beenie Man rings the alarm on "Bad Girl,"
the mood begins to change as cuts from Sade, Ashanti and Diddy hint at trouble ahead.

Winning Music Moment: CeeLo and Lauren Bennett trading sexy, yet menacing come-ons on "Love Gun," combined with the black-tie-hangover styling on our models, resulting in a decidedly 007 moment on set. 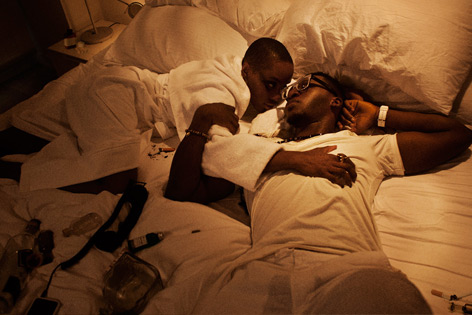 By now, it's clear this is an unhealthy relationship. But like the chemical substances our young lovers fill their bodies and days with,
they've become dependent on something they know could ultimately destroy them.
Part sexy, part maudlin, this list is what it sounds like when doves cry -- after
doing tons of heroin and screwing all day with no memory of what sunlight feels like.

Winning Music Moment:
As Rihanna's "Man Down" plays in the background, Bez and I'Yana make tortured
magic in the climactic bedroom scene. It's a hauntingly beautiful sight to behold,
and the room soon goes quiet -- Rihanna is done and most of my directions come
out as a whisper. Then makeup artist Kevyn cracks the entire set up with
the deadpan: "Wow, y'all really look
like you found love in a hopeless place."