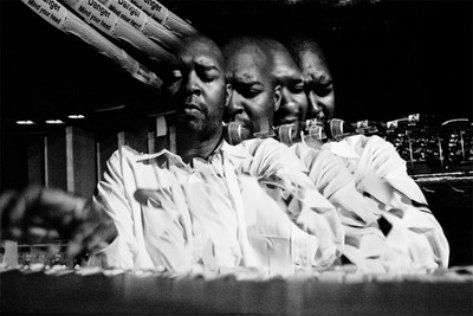 Despite my intense love for music, that passion has never been able to be translated into any semblance of actual musical skill. Save for three months of flute lessons in the fifth grade, my ability of producing anything remotely listenable is nonexistent. So if you were to sit me in a room with a computer and some instruments and tell me to mess around until I create a song, you'd find yourself waiting a loooong time. However, when Bugz In The Attic's Kaidi Tatham messes around on his computer, the result is nothing short of amazing. A few days ago, he uploaded a new song "Molten" to his SoundCloud, prefacing it with the dismissive that it was created while "just messing around on his new comp." Although it only clocks in at under three minutes, Kaidi still packs a wollop of a punch in when the piano, bass and drums kick in. Bugz isn't the only collective Tatham is known for; most recently, you may know him as one-fourth of TMLR, a super group quartet consisting of himself, Akwasi Mensah, Matt Lord and Dego Ranks. Whatever endeavor he's working on, as long as he keeps cooking up music like this, I'll be more than happy to leave the keyboard tinkering up to him.