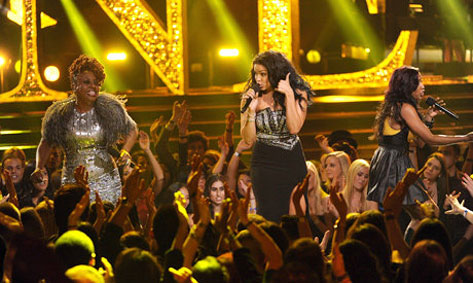 There has been a tribute to the late, great Whitney Houston at every major awards show/TV special since her passing, and rightfully so. VH1 added their contribution at this year's VH1 Divas event, celebrating some of Whitney's biggest dance hits in a segment of the show after previously announcing that the whole thing was dedicated to all things Whitney. Honestly, it's probably best that the idea to do a whole two-hour VH1 Divas special in Whitney's honor was scrapped after all.
Center

The VH1 Divas franchise used to be something that everyone was eager to see. From my view, it was the place to see the "legends" feted and to let the "youngins'" (to take the term from Oprah Winfrey's Legend's Ball) show why they are the heirs to the throne. To see Mariah Carey share the same stage as Aretha Franklin or to see genre's cross as Sugarland performed with MC Lyte was wonderful. This year's special lacked the magic contributed by any legendary headliners (and actual divas), but I am assuming they decided to go into a different direction being that the tributes were central to the show.

As for the Whitney tribute, Jordin Sparks (all grown up and awkwardly sensual with a thigh-high split) started with "I'm Every Woman." Next up was Melanie Fiona with "I Wanna Dance With Somebody" and an awful transition into "It's Not Right, but It's Okay." To close out the tribute, Ledisi tried to shut it down with "How Will I Know." Anyone who saw the BET Awards wondered why Brandy was only utilized to introduce the VH1 Divas tribute instead of recreating her show-stopping rendition of Whitney's dance songs. I know that Jordin, Melanie and Ledisi are all very talented in their own right and sincere in their love for Whitney, but this did not live up to the standards for which I had hoped. I spent more time going over who should have been performing than who was on stage.