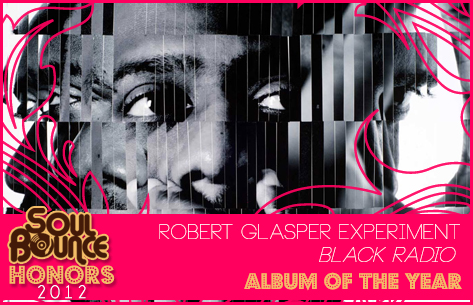 We knew back in late 2011 that this album was going to be something extraordinary. Without hearing one note of music, the tracklisting and artist roster that Robert Glasper amassed on this project were enough to send shivers of excitement up the spines of those of us at SBHQ. Having loved 2009's Double Booked, which featured the GRAMMY-nominated favorite "All Matter" featuring Bilal, we were more than ready for something fresh to keep that song company in heavy rotation. We got just that when the new year dawned and our first taste of this new music came when Glasper leaked the song "Move Love," a collaboration with the queens of KING on vocals. He gave this piece away for free on his website, but you almost wished that there was a tip jar to leave a little something behind when the song floated from your speakers and caressed you like a delicate embrace.

That first sample of Black Radio was enough to get us open, but over the course of the first week of January we heard two more tracks that sealed the deal with a sensual kiss that this was the album to own when it dropped. Where KING took us on a heavenly ride through cotton candy clouds, "Afro Blue" with Erykah Badu brought us back down to earth on the soul-drenched cover of the jazz standard. Badu was in fine form vocally on the updated interpretation that had a head-nod, finger-snap and toe-tap factor going for it. Then the official first single, "Ah Yeah" starring Musiq Soulchild and Chrisette Michele, was released, and it was now all too clear that this was going to be a bonafide soul album. Yes, these three songs were jazz to the core, but they were soul at the heart. These three appetizers built an incredible buzz for Black Radio that prepared us for the feast when it was finally released on February 28th.

Robert Glasper and the Experiment's Chris Dave on drums, Derrick Hodge on bass and Casey Benjamin on multiple instruments crafted an album that sounded like SoulBounce come to life. The gumbo of genres and cast of vocal all-stars made this a fantastic maze of sound to get lost in. Jazz, soul, R&B, hip hop, funk and rock were served in proper portions (not too much of one thing, just enough of another) and guests each brought their unique something to the table. Individually, talents like Lalah Hathaway, Ledisi, Meshell Ndegeocello, Yasiin Bey, Lupe Fiasco, Shafiq Husayn, Stokley Williams of Mint Condition and the aforementioned artists are amazing beyond words. But together on one album? Amazing beyond comprehension.

Probably the most impressive and ambitious track to be found on Black Radio was the cover of Sade's "Cherish The Day" by Hathaway. More than a remake, it was a complete overhaul of the original to create a practically brand new song that even Sade purists would have to respect. That's something that was ever present on a Black Radio -- a respect for music, specifically "black" music. It's no coincidence that an album entitled Black Radio was so brilliant in a year that black radio itself continues to be an urban wasteland and shadow of its former self. The running commentary with scathing indictments on the state of the music industry from Glasper and his fellow artists throughout the album weren't bitter but a call to do better. Robert Glasper Experiment's Black Radio definitely led by example.