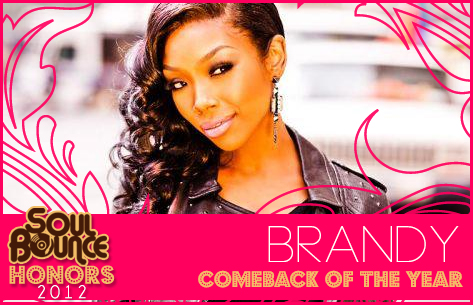 The year 2012 saw the ultimate resurgence of the R&B
diva -- from Kelly Price's GRAMMY
nomination celebration, to TV One's hit series following Faith Evans and her circle of soulful sisters, down to the return
of SWV. Many of us welcomed these women with their unparalleled
voices back into our hearts and onto our playlists. But this year's greatest
moments came along when the world welcomed back Brandy Norwood.
Center


Whether fan, friend or foe, not a soul could deny the
re-emergence of Brandy this year. In the past, we have seen her publicly live
out her wildest dreams and biggest fears. We watched her grow from Danesha on Thea to Moesha on Moesha. We heard her sing chart-topping
and award-winning hit after hit from her 1994 self-titled debut album, to Never Say Never as well as her critically-acclaimed album Full Moon. And then
things got a little tricky. As she reported in her VH1 Behind The Music special that aired earlier this year, Brandy
found herself in a world wind of lies, reality TV and lackluster album sales.

But it seems that Brandy chose this year to rise above it
all. Starting off a bit rocky, as did most of us, she embarked on a
promotional trail with former foe turned friend, Monica. In preparation for Monica's album, the
duo released "It All Belongs To Me" and went on to perform and even
participate in a few interesting interviews together. Going on to prepare her
fifth studio album, even after losing her idol and friend, Whitney Houston, Brandy was determined to return back into the
spotlight.

Known for her vocal acrobatics and smooth tone, Brandy
reminded us all this year why we first loved her. We may not have been too crazy about her first
single "Put
It Down" with Chris Brown,
but we loved "Wildest
Dreams." She reeled us in with her second single and won us over again as she
released her album Two Eleven.
Featuring stellar moments like "Without You," the jazz-soul love letter "Music" and the Frank Ocean-penned "Scared
of Beautiful," Brandy's latest album holds a gem or two for every listener. Sporting
her first Billboard top ten hit single in a decade as well as a shiny new
engagement ring from her beau, Ryan
Press, Brandy is indeed having the best year ever.